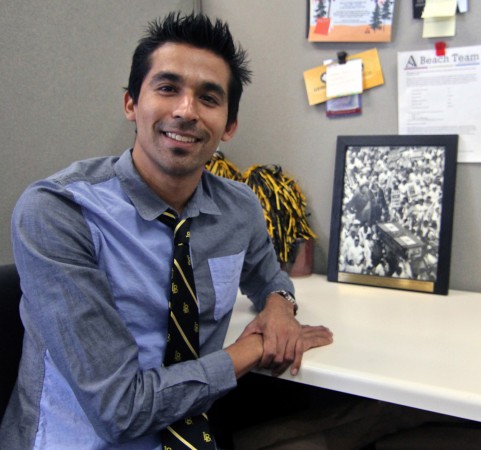 College would have to wait.

With his mother on the verge of losing her home, Jorge Sandoval needed to make money fast. He quit Santa Ana Community College and began to search for more work to supplement his job at Circuit City.

A chance encounter with talent recruiters at a mall led to a two-year stint acting and modeling for independent films and brochures to pay the bills.

“I panicked. I wanted to do everything I could to take care of my mom. I’ll wear underwear, I’ll figure it out – you don’t have a choice,” said Sandoval, 27.

His story is not uncommon. It’s estimated that 65,000 undocumented youth graduate from U.S. high schools every year but only a small fraction make it to college. Those who do often face unique obstacles that can impede graduation.

In order to assist students like Sandoval, California State University, Long Beach recently approved a resource center for undocumented students and hired a full-time coordinator to run it.

“This student population is truly unique in regards to the constantly changing laws and policies that affect their education and everyday lives,” said Edgar Romo, who will serve as the center’s student success coordinator once it opens in January.

“Both the coordinator and the center will need to stay current on topics such as DACA renewals and driver’s licenses in order to provide sound and accurate information to students, the campus community, and the greater Long Beach area,” he added.

Yet while the CSU and community college systems serve the bulk of undocumented students in California, CSULB’s “Dream Center” – named for Dreamer students who qualify for in-state tuition at community colleges, CSUs and UCs under California’s AB540 – will only be the third such center in the entire CSU system…