Celebrating the Latino Vote in Escondido

How did a group of Latino activists celebrate on Nov. 6 after working for nearly two months to get out the Latino vote in Escondido? For one thing, they danced La Macarena and enjoyed a buffet meal at La Cocina del Charro restaurant.

For many it was their first engagement in political activities. Some were first time voters. According to the National Association of Latino Elected Officials, every 30 seconds a Latino citizen turns 18 years of age. That means there are 50,000 potential voters created every single month.

“You guys are awesome,” said Angelica Godinez in a pep talk to a dozen young volunteers on a recent afternoon at the Nuestro Voto, Nuestro Futuro office near Escondido’s city hall. “You are rockin’. You’re animals. You’re unstoppable.” 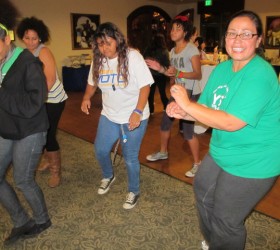 Godinez, a coordinator of the Nuesto Voto voter registration campaign for the American civil Liberties Union (ACLU), trained and coordinated the canvassers and phone bankers for the past two months in an effort to improve Latino turnout at the polls on Nov. 6.

The results of the campaign were impressive. Dozens of volunteers saturated Escondido’s inner city where nearly 50 per cent of the residents are Latino. They registered hundreds of voters and secured assurances from more than 9,000 people that they would indeed vote.

The volunteers engaged residents in conversations, educating them on ballot measures such as Proposition 30 (funds for schools), and Proposition 34, on abolishing the death penalty.

Most responded enthusiastically, planned to vote, and requested information on the issues and the location of polling places. Somehow, they concluded, their votes would count.

The scene in Escondido has become familiar lately: thousands of young Latino activists participated in registering and getting-out-the-vote projects throughout California and the Southwest.

Among the celebrants La Cocina del Charro was Tayana Zarate, 18. “I never cared about politics and government,” she said. “But now I know our vote counts. The big issue here in Escondido is racism—at people’s jobs, at restaurants and public places—even at City Hall. It needs to stop…”

Latino vote, presidential election
Previous Post Video: Across the nation, Latino communities band together to honor their loved ones killed in military service
Next PostNew campaign strives to remember only all-Latino Army unit in history with Congressional Gold Medal

Video: Across the nation, Latino communities band together to honor their loved ones killed in military service
Comment
New campaign strives to remember only all-Latino Army unit in history with Congressional Gold Medal