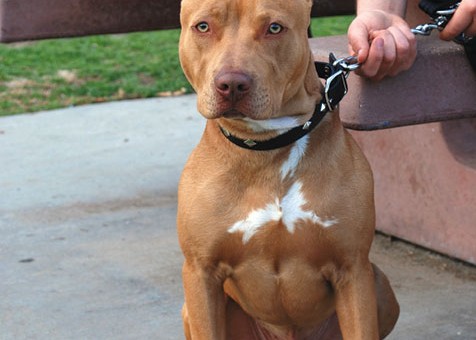 A protest against vicious dogs was held on July 30 in Little Village. The protest was supported and organized by local activist Raul Montes Jr.

“Somebody’s gotta bring it up,” said Montes Jr. in reference to this problem. “I work in this community and some of these people were very upset, like my neighbor, whose dog was killed by a pit bull. There’s a lot of pit bulls running around. They’re vicious dogs and I think there should be accountability, liability for these animals.”

Little Village resident Wendy Brito said that her dog, who was attacked on July 4, was “viciously attacked and bit three times by a pit bull.” Brito explained that she was walking her dog who was trying to use the washroom when a pit bull dog ran out of a house with two open fences and attacked it.

“The only thing I ask for is for more protection around the streets. Its not only the dogs, but also the people, that are in danger of getting attacked by other vicious dogs without a leash or without the guidance of their owner,” said Brito.

Brito said that the owner’s brother grabbed the pit bull by its collar and kicked it inside the house. The pit bull didn’t have a leash. Over a hundred dollars of medical bills were paid by Brito’s family. Ruth Brito also mentioned that the pit bull is still at his house. Animal Control has not picked it up.

“Earlier today I passed and the gate was wide open. I don’t know if the dog was tied up,” said Ruth Brito, referencing the pit bull house gate.

“I know my cousin’s pit bull Meaty is always around a seven-year-old, a five-year-old and a one-year-old and she is lovable and not bad tempered,” said Evelyn Santos, a resident of Little Village. Santos explained that not every pit bull is vicious and it all depends on the owner.

Montes Jr. also explained that he sent letters to Mayor Rahm Emmanuel and…