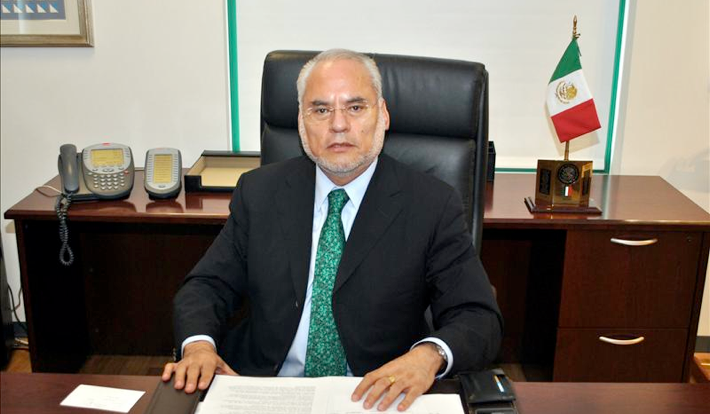 Chicago’s new Consulate General of Mexico, Carlos Martin Jiménez Macías, 62, is a member of the Institutional Revolutionary Party. He’s served in Mexico’s Federal Legislature three times and has been a San Luis Potosi Senator twice. He’s an experienced politician. Extra was able to sit down with him over the extended July 4 holiday weekend to discuss his plans for the consulate and new immigration reform.
Jiménez explained that he wanted to make the process of going to the consulate more streamlined and efficient. While he’s only been in the job since April, he says he has been studying the problematic way that the consulate functions. Jiménez, who has a degree in psychology, wants to use performance metrics to measure the consulate’s activities and performance in order to increase efficiency. One such issue he’s discovered using performance-based metrics is that service windows usually take about ten to fifteen minutes to help people when they should be able to help them in seven.

“We need to better organize the way people come into the consulate and how we provide them with services,” said Jiménez. “We have a responsibility to the people that come here. I want to make sure they get the best service.”

One example he gave was the better clarification of guidelines online.

“That way people don’t waste time returning again and again because they have the wrong documents,” said Jiménez.

Jiménez wants the transition to performance-based service metrics to be implemented within the year and stressed that during the transition people will need to be patient with the way the consulate functions, saying that moving to the new systems will be a collaboration between consulate workers and the people they serve. The reason he is fast tracking this plan stems from the fact that the consulate in Chicago is nearly overwhelmed with the processing of documents for Mexican citizens.

The Chicago consulate has jurisdiction in Illinois, southern Wisconsin and northern Indiana, where three million Mexicans live. The immigration reform bill currently being debated in Congress would add about 250,000 people in the region that would need consulate services like the expediting of driver’s licenses for undocumented immigrants.

Long before Jiménez became involved in politics and performance metrics, he himself was a teenage undocumented immigrant living and working in Chicago…