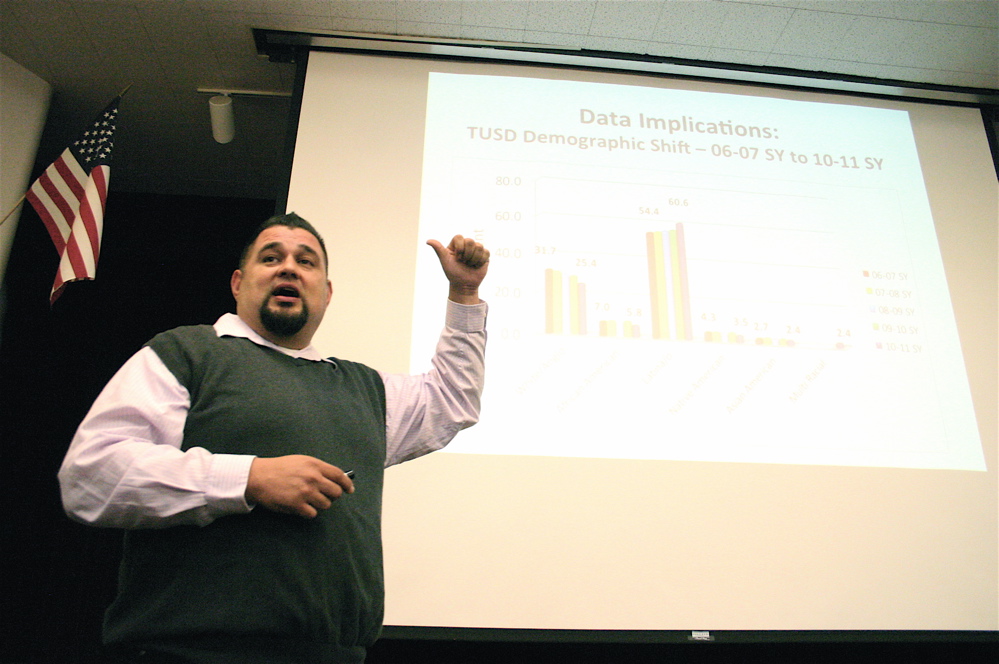 As he surveyed the room, Sean Arce hit the play button and the video kicked in on the screen. Students, high school students, could be seen on the video rushing to sit and chain themselves to the chairs belonging to board members of the Tucson Unified School District (TUSD).

What followed was chaos as security officials struggled to remove the chains and oust the students. After a while, they gave in and the board cancelled the meeting.

“So much for the notion that Latinos don’t care about education,” Arce said of the six-minute video “Fight Back — The battle to save ethnic studies,” which can be found at http://vimeo.com/24861621. “Did you chain yourself to a chair when you were in high school?

But while students won that skirmish that night, they ended up losing a larger battle when the TUSD board eventually, and under tight security — including heavy police presence, handheld metal detectors and barracades — voted in January 2012 to eliminate the district’s Mexican American Studies (MAS) Program.

They did so in order to comply with HB 2281, passed by the stage legislature and signed by Gov. Jan Brewer in 2010, which banned ethnic studies programs statewide. The law was upheld in March 2013, with the case now expected to be heard by the 9th Circuit Court of Appeals by next summer.

Meanwhile Arce, former director of the MAS Program at the school district, was fired from his position in April 2012 and spends his time talking to audiences about the law and the continuing struggle to bring back the program.

Arce of BarrioPedagogy Educational Consultants, presented his case for lifting the ban on ethnic studies, speaking to more than 75 students, faculty and community members during a presentation held Oct. 30 at Northern Arizona University.

During his talk, he spoke of how the board’s ruling violates…