OXNARD, CA — Oxnard residents are being urged to call the California Redistricting Commission to voice their opposition to a proposal that would split Oxnard into two Assembly Districts. 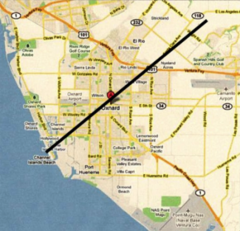 Half of Oxnard’s residents, as well as Santa Paula and Fillmore, would be split and go into Simi Valley’s 37th Assembly District, opponents reported. Half of Oxnard would also fall within the 24th U.S. Congressional District. The plan is being reviewed by the commission by June 10.

Ventura County residents must wonder how California Redistricting Commission staff decided to submit a draft proposal that split Oxnard into two Assembly Districts. There is no doubt that California’s unique demographics present a challenge for commission staff that draw the lines. However, dividing a community of almost 200,000 mostly Latino voters hardly seems fair or even legal.

A decade ago Oxnard was again divied up as politicians from both parties created their own “safe” districts. The plan ignored communities of interest and in the process Oxnard wound up with two assembly members, one based in Santa Barbara and another in Santa Monica.

This also diluted the voting power of Latinos and had far reaching effects on the number of local Latino elected officials.

California Redistricting Commissioner Michelle DiGuilio was quoted in this morning’s Ventura County Star as saying “given that we’re constrained by section 5 (of the federal voting rights act) to the north, it seems like you have to do a split of Oxnard”.

We respectfully disagree. Commissioners are bound only by the law of the land and their best judgement.

If the reasoning behind this involves the pre-clearance requirements imposed by federal law to protect minority voters in Monterey County, then it makes little sense to repeat the practice that imposed the pre-clearance in the first place, some where else.

Commissioners must consider it their duty…

Previous Post Grad student studies relevancy of quinceañeras for today's Latino families
Next PostU.S.A.: Latino community has no shortage of strong role models so where are the mentors?

Grad student studies relevancy of quinceañeras for today's Latino families
Comment
U.S.A.: Latino community has no shortage of strong role models so where are the mentors?