¿Cómo te llamas? A Look at the Growth of the TX Hispanic Population Through Popular Baby Names

There are lots of ways to examine the growth and impact of the Hispanic population in the United States. Certainly the Census Bureau provides a vast array of data through its many surveys and the decennial census. But there are other data sources which also paint a portrait of what is going on with respect to population growth both in a quantitative and qualitative sense. 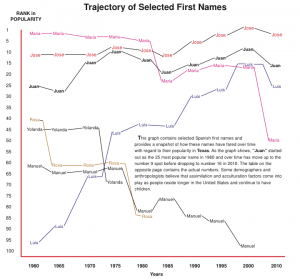 In 1986, as part of the Tax Reform Act, the Internal Revenue Service (IRS) began to require dependent children’s Social Security numbers on income tax returns.This led to an increase in the number ofparents who sought social security numbers for their children.

The data for the graph to the right comes from the Social Security Administration and is for the State of Texas. It shows, among other things, that from 1960 until 2009, the name, “Jose” has been one of the most popular first names given to boys.

From 1960 until 2003 the name,“Maria” has been among the top 25 names given to girls born in Texas. As the graph and table on the opposite show, some Spanish first names have seen a drop in popularity over time.