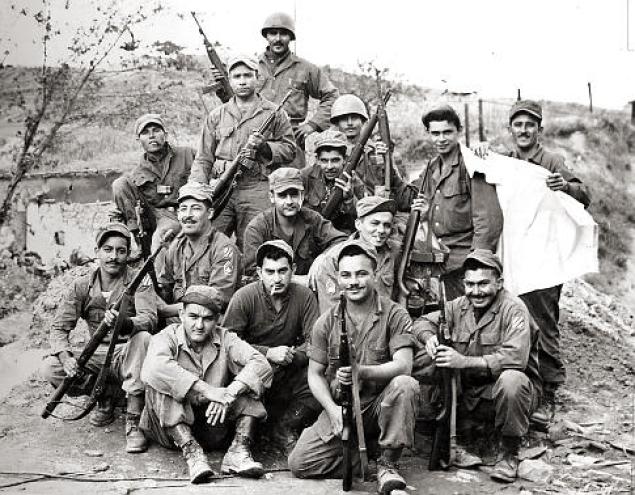 Gov. Dannel P. Malloy and Lt. Gov. Nancy Wyman will present the Borinqueneers, the 65th Puerto Rican Infantry, with a proclamation of honor today at 2 p.m. in the Hall of Flags at the state Capitol in Hartford, Conn. The 65th Infantry Regiment was completely based, and for the most part, trained in Puerto Rico. Members decided to name themselves “Borinqueneers.”

During their service, members of the regiment, which was a segregated unit, endured such indignities as being forced to use separate showering facilities from their non-Hispanic “Continental” officers and ordered not to speak Spanish under penalty of court-martial. The Borinqueneers were originally activated on June 4, 1920, after which the unit participated in World War I, World War II and Korea. Several veterans of the unit will be in attendance Tuesday. A national movement is underway to award the Borinqueneers the Congressional Gold Medal. CTLatinoNews.com is a proud sponsor of this effort.

Similar in nature to the famed Tuskegee Airmen and other segregated U.S. military units, the 65th Infantry Regiment Borinqueneers were the largest, longest-standing and only active-duty segregated Latino military unit in U.S. history.

Like the Tuskegee Airmen, Navajo Code Talkers, Nisei Soldiers and Montford Point Marines who have already been recognized with the Congressional Gold Medal, the Borinqueneers overwhelmingly distinguished themselves in battle, all the while enduring the additional hardships of segregation and discrimination.

Hailing from Puerto Rico, the U.S. Army unit was active from 1899-1959. Emblematic of all U.S. military veterans, including the hundreds of thousands of Latino-American veterans, the Borinqueneers served and sacrificed in the cause of freedom with great pride The youngest of these remaining Latino-American heroes are in their 80s and 90s, having served in the Korean War, 60 years ago or more.

A nationwide, nonpartisan, all-volunteer group, the Borinqueneers Congressional Gold Medal Alliance, has been advocating the awarding of the Congressional Gold Medal to these elderly veterans since late last year. Made up of veterans, Latino-Americans and like-minded patriots, the organization has worked closely with members of Congress to facilitate the successful introduction and subsequent support of special bipartisan legislation, which requires co-sponsorship by two-thirds of each chamber for passage.

The House of Representatives bill, introduced this spring by Rep. Pedro Pierluisi, D- Puerto Rico, and Bill Posey, R-Fla., H.R. 1726, currently has 123 of the required 290 co-sponsors. The Senate bill, S. 1174, introduced in June by Sen. Richard Blumenthal, D-Conn., has…

borinqueneers, Congressional Gold Medal, Connecticut
Previous Post Viernes Video: Latina actress goes after the Hollywood Dream with her own web series
Next PostAlfonso Gomez-Rejon: A Latino Success Behind the Camera

Viernes Video: Latina actress goes after the Hollywood Dream with her own web series
1 Comment
Alfonso Gomez-Rejon: A Latino Success Behind the Camera