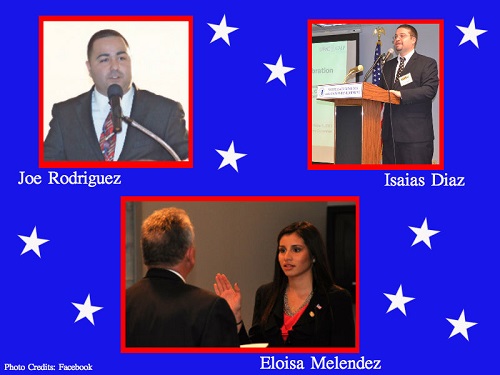 The three have only lived for 84 years, yet in that time, these young Latinos have already made an impact in Connecticut politics.

From leading a state commission, to serving on a city council, to heading the state’s leading Hispanic Democratic Caucus and working in a U.S. senator’s office, there is no doubt they are rising stars in the state’s political arena. And while Isaias Diaz, Joe Rodriguez, and Eloisa Melendez may have different backgrounds and ideology, they have all chosen politics as a way to help the Latino community move forward and they agree – their political careers are only just beginning.

Isaias Diaz, 37, is Puerto Rican and grew up in a single-family household in Waterbury with eight other siblings. Though he grew up poor, he believes he is living proof that breaking the cycle of poverty is achievable and a lifetime of relying on government services is not necessary.
“I had to grind and I had to struggle. I had to pay for my own education, it was tough; it’s still tough,” Diaz said.

Diaz was able to overcome the poverty hurdle and eventually earn a law degree from Quinnipiac University. Soon after, he was appointed to the Latino and Puerto Rican Affairs Commission [LPRAC] and within four months, he became the commission’s chair. He served in this role for four years, with a Democratic majority membership until 2013. He had to leave the position due to leadership term limits, however, he remains as commission member.

“We try to deal with all the issues that are plaguing the Latino community statewide,” Diaz said. “So that has been a great experience.”
Diaz is active in the Republican Party. He currently supports and is helping Sen. John McKinney in his quest to become governor. Diaz believes liberal polices will not benefit the Latino community in the long run and Republican polices are what Latinos need to thrive.

“I just feel conservative principles are…