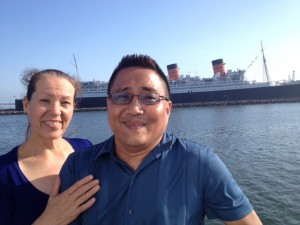 My parents, Rey Sahawi and Alicia Martínez, coexist in an interracial marriage. As they sit together on their balcony, watching the view of Downtown Los Angeles, they reflect and fully understand that love has to be a deciding factor into why their marriage has lasted for such a long time. This couple is no stranger to fighting boundaries. They are able to reflect their triumphs and their challenges since meeting one another nearly 25 years ago. Living in a city with a vast cultural diversity, this interracial couple proved that love has no skin color and battled a long storm of criticism before gaining acceptance.

“We had problems in the beginning of the relationship because we were different races,” said Martínez. “They said it wasn’t going to work because we had different customs and ideologies.”

My mother is Mexican and my father is Filipino. When my parents began dating in the late 1980s, it was the first time they had dated outside of their own ethnicity, but although they were under unfamiliar grounds, it gave them the ability to learn about each other’s cultures, ideologies, and customs. Prior to meeting one another, they migrated to Los Angeles hoping to achieve the “American Dream.”

Los Angeles is a global city that maintains its hierarchy status by finance and trade. The mass appeal to labor has attracted many immigrants to the city. Some come to Los Angeles searching for job opportunities and ultimately find themselves in a culture shock with all these ethnic groups.

Los Angeles has grown into a city that is home to people from over 140 different countries and speak over 224 languages. Due to this cultural unity, it became inevitable for there to be a spike of interracial couples who have been able to break down barriers of the social norm. One out of every 10 million couples are interracial. The rapid increase of these interracial marriages has lead to new group “Mixed, biracial, or mestizo” children, according to the 2010 United States Census of Families and Households.
This graph shows the 2011 Census Bureau of California that is broken up into categories: “39.7 percent Non-Hispanic White, 6.6 percent Black/African American, 13.6 percent Asian, 1.0 percent American Indian, 0.4 percent Pacific Islander and 3.6 percent from two or more races. White Americans 74.0 percent of the total population. By ethnicity, 38.1 percent of the total population is Hispanic/Latinos (of any race) and 61.9 percent Non-Hispanic (of any race).” (Graph: Vanessa Sahawi/ El Nuevo Sol)

Each of my parents had various reasons for coming to the United States. “I migrated here because of the poverty level we lived in and I needed to support my family,” said Martínez. She had left Aguascalientes, Mexico in hopes to create a prosperous future as a single mother trying to provide for her first daughter. When Martínez had left her province, the town had an immense amount of poverty. She would only eat once a day because there was a lack of income at that time. Martínez was unable to go to school because she was the eldest daughter and had to maintain the household chores along with taking care of her younger siblings.

Martínez was one of eight children, so when the opportunity presented itself, without hesitation, she left to the U.S. “When I came to the United States, I thought that my life would be completely different; better opportunities for my family,” said Martínez. “But, it wasn’t. We suffered starvation, all because we had no education.” Martínez found work in factories, housecleaning and later in fast food.
Rey Sahawi and Alicia Martínez back in 2000. (Photo:

Rey Sahawi and Alicia Martínez back in 2000. (Photo: courtesy of Sahawi-Martínez family)

During Marcos’ time, the Philippine’s had undergone Martial Law. This occurred after the minister Juan Ponce Enrile was about to be assassinated but his attackers failed. Marcos decided to take matters in his own hand and to ensure protection he created Martial Laws. The Martial Law prohibited those who lived under these circumstances to have freedom when it came to rally’s, political activism, press freedom or any civil liberties. Marcos made it clear that he did not want to take part with any of the national news outlets and wanted to keep his country on a tight watch.

Link To Timeline: History of the Philippines

My father had come to the United States at the age of twelve because his mother had petitioned for him to come here. “The biggest adjustment from coming to America was the language and dealing with being a teenager in a new surroundings,” said Sahawi. After finishing high school Sahawi had enlisted in the Army. Sahawi was in the Army for 4 years and shortly after moved into his apartment complex that his mother was the manager for.

In the late 1980s, my parents had met in the apartment complex that they both lived in. Martinez was living in the apartment building with her brother and first-born daughter. Sahawi was living with his mother, whom was the landlord and shortly became friends with Martínez’s brother. “I didn’t like him as a boyfriend. I only saw him as a friend. I don’t know how it happened, but I slowly fell in love with him ,” said Martinez.

It didn’t take long before…

Previous Post Video: Another deportation rips apart yet another family with a young child growing up too fast
Next PostStephanie Pucheta, 10-Year-Old, On Dad's Deportation: 'Why Do They Have To Be So Cruel?'

Video: Another deportation rips apart yet another family with a young child growing up too fast
Comment
Stephanie Pucheta, 10-Year-Old, On Dad's Deportation: 'Why Do They Have To Be So Cruel?'