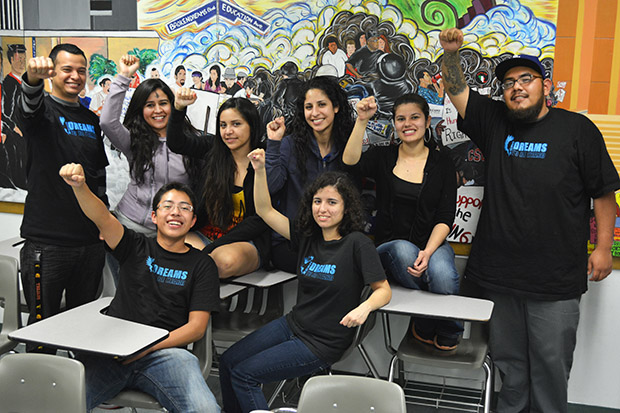 After nearly a year-and-a-half of tenacious meetings with the California State University, Northridge administration, CSUN’s undocumented immigrant advocacy coalition, Dreams To Be Heard (DTBH), have broken a barrier which will allow for the undocumented student movement to move closer to their ultimate goal as underserved students: an undocumented resource center for students — which would be a first for the CSU system.

A meeting between members of DTBH and CSUN administration was held on Tuesday, March 4, at 2:30 p.m., with the sole purpose of designing a progressive itinerary to achieve DTBH’s vision of equity.

“I have known many people who give up on school because of the lack of support for [undocumented] students. There are cases where people have become depressed or have even committed suicide,” José Rosas, Chicana/o studies major and co-chair of Dreams To Be Heard, said.

The undocumented resource center will be an inviting space for students to find out what kind of support is available to them — be it information regarding financial aid and scholarships, or information about what it means to be undocumented and to have a place where students can go to get information on how to plan for their future.

There were no hard-nosed politics or condoning of the issues at the latest meeting. Provost Harry Hellenbrand was willing to begin accommodating DTBH’s requests; fund permitting.

“The [provost] has been open to working with [undocumented] student’s for some time. There’s a lot of issues that we have to explore like confidentiality, because not all students who are undocumented want to be ‘out’ about their status. We don’t want to inadvertently hurt anybody’s privacy,” said Juana Mora, Ph.D., assistant to the Provost, Hispanic Serving Institutions & Diversity Initiatives.

(Featured Photo: After organizing with CSUN administration, Dreams To Be Heard members will be opening an undocumented resource office in the Fall. Photo: John Saringo-Rodríguez/El Nuevo Sol)