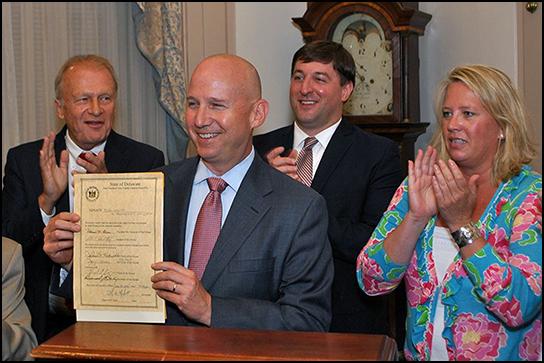 DELAWARE — Finally, on June 29, after much anticipation, by a vote of 22 in favor and 15 against, Senate Bill 59 was passed by the State House of Representatives and signed immediately by Governor Jack Markell.

Many Hispanics turned out in support of this bill sponsored by Sen. Bryan Townsend with bipartisan support. Delaware residents who are not U.S. citizens will be able to legally drive after they meet the same requirements for licensed drivers, which includes having to buy auto insurance and pass the written test, road test and eye exam, as everyone else does before operating a motor vehicle.

Jonathon Dworkin, the governor’s Director of Communication Strategies, sent us the following statement: “The governor has supported this privilege card. These individuals are living, working, and participating in our communities with their families, and we all benefit if they are educated drivers and have car insurance.”

Meanwhile Javier Torrijos President of the Hispanic Caucus of Delaware, visibly pleased commented that “this law is extremely important to thousands living in Delaware because it is an intelligent and meaningful legislation that can make a huge difference in the lives of undocumented immigrants who cannot get a driver’s license. It is a great opportunity for these people to get a card that gives them the privilege of driving on our roads and have insurance for their car. This (legislation) makes perfect sense from the standpoint of public safety, hence that it is intelligent and meaningful.”

Meanwhile the young Miguel Tapia said that on Tuesday, June 30, the community was present to witness the vote on the driver’s license legislation. It was the last day of debate and anxiety was very high among Latino leaders, as well as, those politicians who supported this law. At the end of the night, the immigrant community and the Latino community celebrated a big win! Governor Markell signed the legislation in less than 180 days, undocumented immigrants will have their driver’s licenses.

With this new law, it is important that people know that no business should charge them for the process of obtaining this privilege. It is very easy to get and community leaders are working to establish workshops for the community. But there will be costs associated with the official application for the driver’s license.

Frank Raskauskas, President of Seaford Management, LLC, who testified before the Senate security committee in the previous hearing, told El Tiempo Hispano, “I am very happy that finally it has been approved this bill. It is a step, a big step in the right direction. It is time that the people who are here and who are seeing here, and they are treated with respect is recognized. “To which he added,” Last Sunday I went to Mass at the Church of Our Lady of Lourdes. I went on Sunday as it was the installation of our new pastor. I told a priest of the diocese me comic sense attending the Mass in English, and I attend Mass in Spanish on Saturday afternoon. Mass on Saturday will be a great celebration. It is a prayer of thanks. Our prayers were answered.

Finally Mr. Raskauskas added one more thing: Senator Richardson Bryant was the one who officially asked me to speak on the day of the hearing in the Senate. Much we discussed topic and he voted for what he believes and their beliefs is to help others. He really practiced the Christian principle of “Love thy neighbor as thyself.”

Read the full text of the law at this link

Editor’s Note: The article, done in collaboration with Jesse Chadderdon, is a translation of the original in Spanish at El Tiempo Hispano.

Delaware, driver's licenses, featured
Previous Post Latino college graduates' chances of having a good life are "just as likely" as those of privileged white peers
Next PostCrowdfunder: Computer Education for Nicaraguan Students in Need

Latino college graduates' chances of having a good life are "just as likely" as those of privileged white peers
Comment
Crowdfunder: Computer Education for Nicaraguan Students in Need