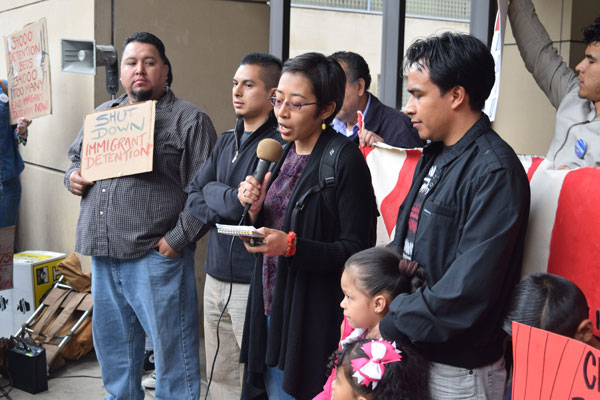 CHICAGO — Last week, Twitter saw a spike in the use of the hashtag #Not1More, which had users calling for the end of deportations and the detention of immigrants in the U.S. However, the movement that began online spilled to the streets of downtown Chicago, heralding protesters and activists calling for an end to all deportations.
Just on Congress Parkway and Clark Street, dozens of demonstrators wielded signs while surrounded by television cameras. They stood outside the Immigration and Customs Enforcement (ICE) field offices, listening to past detainees recount their experiences.

Arnulfo Mercado was one of the speakers. “They identified themselves as police officers,” Mercado said in Spanish. “They handcuffed me in front of my family,” he continued, “and they took me outside in the winter, while I was only wearing a pair of shorts and a T-shirt.”

“But the worst part was being detained,” said Mercado. “They treat us like animals—bound by our hands and feet.” The middle-aged Mercado stood with his young daughter, describing the treatment he received while in custody. “The food they give, they call it food just to say that they feed us, but it is not food.”

“My story is just one of many. I don’t want to hear any other stories like mine,“ he added.

Unfortunately for Mercado, stories like his persist, not just with adult migrants, but their children as well.

Maria Mejia also attended the demonstration with her two children, Oliver, 12, and Miley, 9. The children looked like twins in their matching blue hoodies.

“For four days, we were detained. We were captured,” said Mejia to EXTRA. She explained that ICE agents did not make any exceptions based on age…