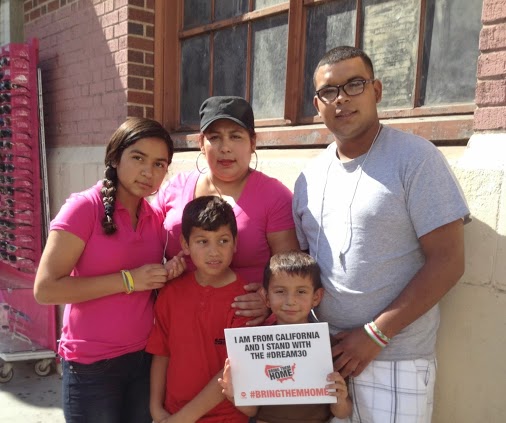 On September 30, Luis Rivera, 17, attempted to enter the U.S. through Laredo, Texas — 1400 miles away from his family’s home in Los Angeles.

As Rivera stepped up to speak with a border patrol agent, he was asked where he was going — his answer: home.

Rivera crossed alongside 29 other Dreamers, like him, with ages ranging from 13-33, as well as three adult parents, and a 23-year-old mother and her four-year-old daughter, the only U.S. citizen of the group.

The Dreamers, dressed in caps and gowns, arrived at the port of entry along with the other undocumented individuals and waited in line while supporters chanted on the other side of the border, and as journalists and servicemen snapped photos of the group.

The demonstration, organized by the National Immigrant Youth Alliance, was an attempt to convince U.S. Customs and Border Protection officials to grant humanitarian parole to the participants.

Prior to their attempt to cross the U.S.-Mexico border, many of them had resided in California, New York, North Carolina, and other states. The youth immigrant-led group organized a similar demonstration in July with nine undocumented students, now known as the Dream 9.

Sandra Jara, 31, a member of the Dream 30, crosses the bridge that connects Nuevo Laredo, México to Laredo, Texas. Photo: Eileen Truax
As with the Dream 9, the Dream 30 movement seeks to bring comprehensive immigration reform into the spotlight.

When President Obama implemented the Deferred Action for Childhood Arrivals initiative in June of 2012, it sought to remove the threat of deportation for undocumented youth, but it has proved to be less inclusive than advertised.

According to a report by the Brookings Institution, between Aug. 2012 and June 2013, 71.9 percent of all DACA applicants were approved, while 23.6 percent were still under review.

While the numbers suggest that a large portion of undocumented youth 30 and under have benefitted from the initiative, a Pew Research Center study in August of 2012 showed…

(Featured Photo: After being separated from his parents and siblings for more than two years, Luis Rivera returns to his Los Angeles home, in hopes of continuing his education. Photo: Alex Corey/El Nuevo Sol)

Intrn'l Video: Riding the monster waves of Praia do Norte, Portugal — from a safe distance
Comment
One-on-One with Rudolfo Anaya