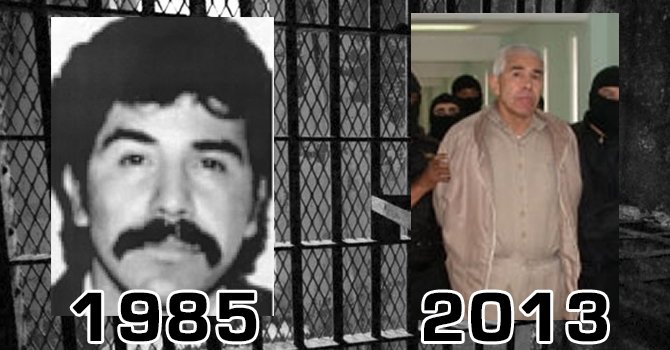 A court ruling in Mexico earlier this month releasing drug lord Rafael Caro Quintero from prison is creating an uproar in the United States.

It stems from the 1985 case holding Caro Quintero responsible for the torture and killing of U.S. Drug Enforcement Administration agent Enrique “Kiki” Camarena in Mexico.

Already, the case has taken many twists and turns in both countries.

A Mexican federal court judge released Caro Quintero on Aug. 9, following his appeal of a 40-year sentence for his part in the Camarena murder. The court said Caro Quintero, who’d served 28 years of his sentence, had been wrongly tried in federal court when the case should have gone before a state court.

DEA agent Camarena was working from the U.S. Consulate in Guadalajara but did not have diplomatic accreditation, which should have been the basis for federal court jurisdiction. As a result, Caro Quintero walked out of confinement, a free man, for now.

The Mexican federal prosecutor’s office has criticized the decision. It said the case should have been referred to a state tribunal with jurisdiction and Caro Quintero should not have been released.

Last week, the Mexican federal attorney general’s office said it had issued a provisional warrant to rearrest Caro Quintero and hold him for possible extradition to the United States to face various federal charges. U.S. officials have 60 days to present an extradition petition, which would give prosecutors a new opportunity to make Caro Quintero answer to the U.S. justice system.

If the drug lord is extradited, tried and convicted in the United States, he could serve a new sentence in addition to the 28 years already served of the 40-year maximum allowed in Mexico for murder.

As a DEA agent, Camarena reportedly provided information leading to a 1984 raid by 450 Mexican soldiers on 2,500 acres of marijuana at a ranch that annually produced an estimated $8 billion in product. Drug lord Miguel Ángel Félix Gallardo found out Camarena was the undercover source and ordered his kidnapping in broad daylight Feb. 7, 1985, by corrupt police officers on Gallardo’s payroll.

Camarena’s body was later found in a rural area outside La Angostura, Michoacán. He had been sodomized, a hole drilled in his head and bludgeoned to death, investigators determined.

In response, the DEA launched the largest homicide investigation it has ever undertaken: Operation Leyenda. Investigators implicated Gallardo and Ernesto Fonseca, among others.

Unlike today, extradition of Mexican citizens in capital cases was difficult back then. That is why the DEA went to extraordinary lengths to apprehend Humberto Álvarez Machaín, the doctor who allegedly kept Camarena alive during the torture. Over Mexican government protests, Álvarez Machaín was kidnapped in Mexico by an independent contractor hired by DEA agents and brought to stand trial in the United States.

Eventually, a U.S. Supreme Court case ruled that the U.S. trial court had jurisdiction in the case, regardless of how Álvarez Machaín was extradited. This caused international alarm that continues to this day, as “extraordinary rendition,” or the abductions in foreign countries of suspects to hold, whether for trial or not, similarly occurred with some 9/11 suspects. The Álvarez Machaín case provided legal cover.

While Álvarez Machaín was on trial in 1992, his counsel asked the judge for acquittal on grounds of insufficient evidence, which was granted. In 1993, Alvarez Machain sued several individuals, alleging numerous constitutional and tort claims arising from his abduction. A 2003 U.S. Supreme Court ruling held that the illegal detention of a single day did not constitute sufficient harm to entitle him to relief.

In addition to those already mentioned, four others were charged and found guilty in agent Camarena’s murder.

The case is not over yet. The situation could get complex again if and when court jurisdictions and criminal extraditions are disputed. But legal complexities should not distract from what is remembered as an open-and-shut case of wanton murder.

(Featured Photo: Caro Quintero at the time of his arrest in 1985 for the murder of US DEA agent Enrique Camarena and as he appeared on his recent release from a Mexican jail.)