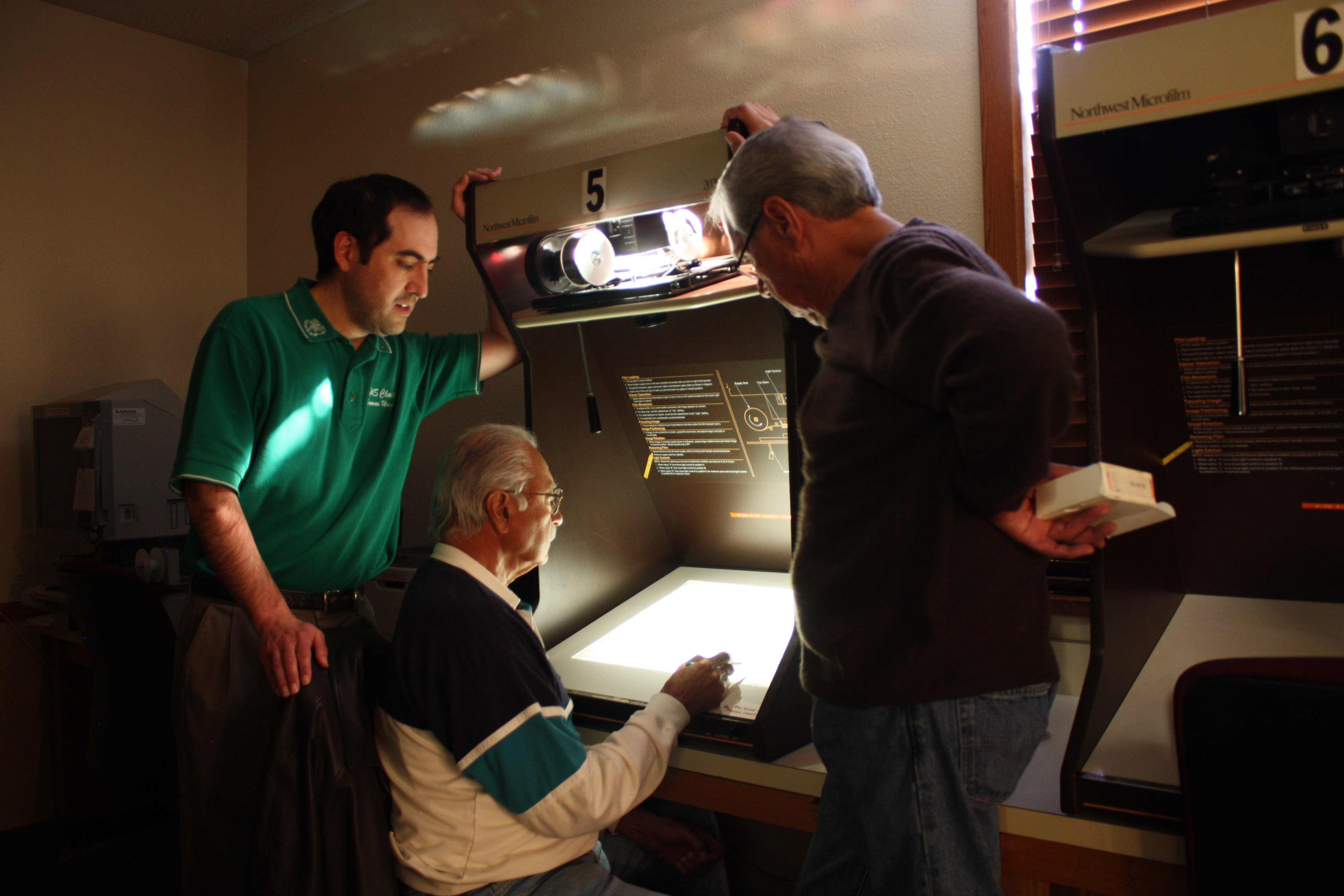 Editor’s Note: This is the first in an in-depth series about family history and genetic links between New Mexicans and Mexico. Nicolás Cabrera, a graduate student studying Spanish, worked on this piece as part of our continuing series of stories written by New Mexico State University (NMSU) students.

It’s a typical Friday morning for Ernestino Tafoya as he gazes intently at a microfilm machine in the Haynes Family History Library in Albuquerque. He scrolls through an old church register from the 1800s, frame by frame, as he extracts vital information the record has concealed for decades. The priest’s handwriting is hard to read but he verifies the baptismal entry, which is written in Spanish and contains archaic abbreviations and terms. He has done this meticulous work for over 25 years and has extracted well over 20,000 names that chronicle the family history of the average Neomexicano, or New Mexican, since the arrival of the Spanish-Mexican settlers in 1598.

These paper records link New Mexicans across the centuries to Native American and European relatives in Mexico and Spain and tell their history, which is also interwoven by blood and DNA. Like many New Mexicans, Tafoya has deep roots in the state and his passion for family history was born out of a desire to learn more about them and his identity. In so doing, he has become an expert in genealogy records and family history for northern New Mexico.

“I was born in San Miguel County in San Miguel del Vado and raised in San José. I wondered where the people from San José had come from because they couldn’t have been there forever. So, that’s why I got started,” said Tafoya.

“Basically the people from San José and that area had come from Santa Fe and a lot of them were a part of the Diego de Vargas people including the Tafoyas. They had come from Michoacán (Mexico) and one of the soldiers that came with de Vargas was my ancestor, Antonio, who stayed in Santa Fe. Two other brothers named Cristóbal and Juan settled in the Santa Cruz area,” he said.

Extractors like Tafoya work hard since they do everything twice: first by extracting the information and then checking it for accuracy. Many become proficient at paleography, the study of writing systems and historic documents, as they sort out illegible handwriting, abbreviations, locales, ecclesiastical terminology, and other enigmas written in church and civil records in Spanish. Afterwards the information is made available to genealogists and family historians in print or online databases.

Tafoya has two colleagues with whom he works regularly at the family history library. Fred Aguirre is a retired engineer originally from Las Cruces who now resides in Albuquerque. He is an expert in the genealogy of southern New Mexico, which supersedes interstate and international borders to include El Paso, Texas and Ciudad Juárez, Chihuahua, Mexico. He got interested in genealogy for many of the same reasons that Tafoya did.

“I was curious about my great-grandparents who I didn’t know. A cousin had done some genealogy, but it wasn’t very clear and I didn’t have a lot of the background information to support it,” said Aguirre.

“Basically I started there and then there were some books on the Santa Fe Trail which prompted me to research a little more because one of my ancestors, Epifanio Aguirre, used to travel from Chihuahua to Missouri to do trading with merchants. Then he married a merchant’s daughter and I got interested in the Santa Fe Trail as a result of that,” he said.

Aguirre says that the story of southern New Mexico, including El Paso and Juárez, is linked to that of northern New Mexico. They are connected through history and blood as people moved up and down the Camino Real de Tierra Adentro, the historic 1,600 mile (2,560 km) route that linked Santa Fe to Mexico City.

Ángel de Cervantes from Las Vegas, New Mexico agrees with Aguirre. He has…