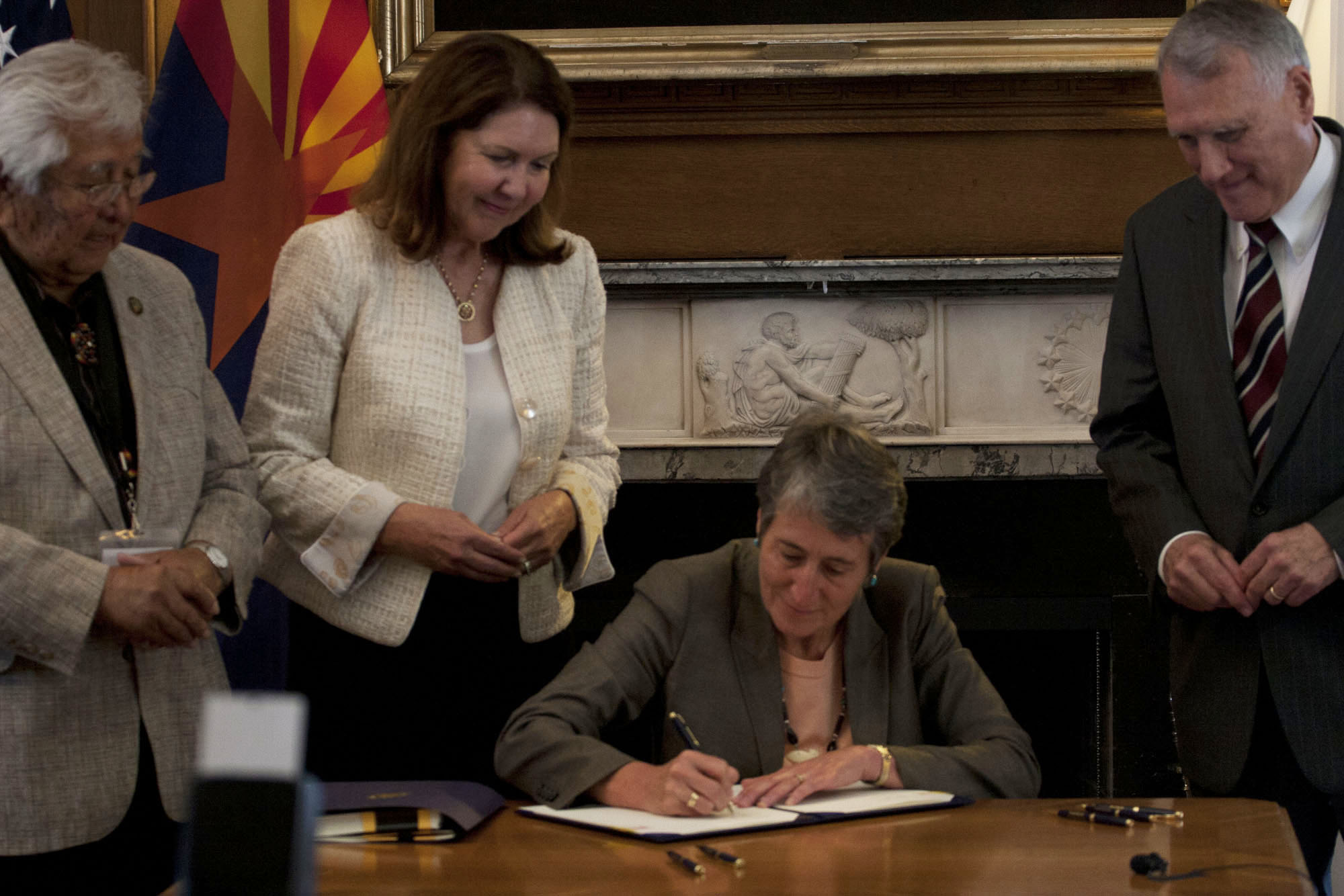 WASHINGTON – The federal government and White Mountain Apache tribe signed a “historic” water-rights agreement Tuesday that the two sides said will guarantee water for the tribe and benefit Phoenix water users as well.

The deal ends decades of legal wrangling over rights to water from the Little Colorado and Gila rivers by allocating about 23,000 acre-feet of water from the Central Arizona Project to the tribe each year.

It also includes $200 million for construction of a new water system for the tribe and an additional $78.5 million for fish production, lakes, irrigation and other water projects.

By resolving questions over control of water in the Salt River basin, the deal will also ensure the tribe and residents of Phoenix have a water supply for the “next 100 years,” said Interior Secretary Sally Jewell.

“This opens a new chapter in tribal water-rights,” Jewell said at a signing ceremony in Washington with officials from the tribe.

White Mountain Apache Chairman Ronnie Lupe praised the work of those who helped bring about the deal.

“Your work will make a dramatic difference for the people in my community,” he said to Jewell. “No longer will black water from dirty wells come from the faucet.”

The agreement was the last of four water-rights measures included in the Claims Resolution Act of 2010. That act included the White Mountain Apache Water Rights Quantification Act of 2010, originally sponsored by Rep. Ann Kirkpatrick, D-Flagstaff, in her first term and steered through the Senate by then-Sen. Jon Kyl, R-Ariz.

This settlement is “an example of what can happen” when there is trust between all parties in negotiations, Kyl said Tuesday at the signing. “We had virtual unanimity because we had trust.”

Kirkpatrick, who was born and raised near the tribe in McNary, agreed.

“Thank you, chairman, for having the heart of your people” at the center of this agreement, she said to Lupe.

Kyl said the agreement could serve as a template for future water-rights deals, including negotiations over Colorado River rights that faltered last year after talks broke down between the federal government and the Navajo and Hopi tribes.

The settlement came one day after the administration convened the first-ever White House Council on Native American Affairs.

That council – chaired by Jewell with representatives from every Cabinet department as well as other federal agencies – is scheduled to meet several times a year as a way to engage in a “government-to-government relationship with federally recognized tribes.”

But Tuesday, Jewell was focused on the White Mountain Apache agreement.

“We don’t want any child to have black water when they turn on the faucet,” she said.

“Without water, we would perish as a people,” he said.

Intrn'l Video: Mexican conservationists work with shark fishermen to make Mexico a shark sanctuary
Comment
Paul Ryan Wants Boehner To Bring Immigration Reform To A Vote Even If Most GOPers Don’t Support It