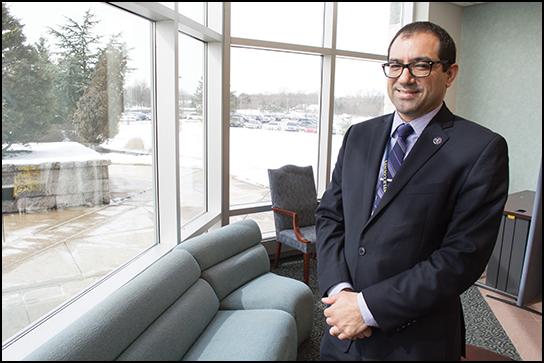 For the first time in the history of New Castle County, a Hispanic is in charge of the county’s communications. He is the bridge between the county government and its constituents; he handles all the information that the people who live in the county know about the government.

Antonio Prado: The Hispanic Voice of the County

We have always wanted to know a bit more about this young journalist, who today has become the voice of New Castle County.
Hopefully this short biographical sketch will show you a little more about the life and works of Antonio Prado.

Prado is a young man born and raised in Wilmington. He is the son of a Cuban father and a Puerto Rican mother. His father arrived from Puerto Rico in 1957 and his mother from Cuba in 1962 with the Peter-Pan mission. He is the second of 5 children. The family worked hard for many years, his father was a teacher of Spanish and some French, and his mother worked for the police department as “Parking Officer “. From his parents he learned that the only way to succeed is studying and working hard, and that he has done all his life.

His spiritual and academic education was conducted by the Salesians, and there he confirmed that effort is essential for attaining our goals.

Jesus Prado, his father, was a councilman for the 5th district of Wilmington, and his brother Sammy is now the councilor for the same district.

During college he had the opportunity to choose journalism as a profession and participated in The Review, the student newspaper of the university from 1995 to 99. Internet was just starting and right there he realized where the future of journalism was.

“I was lucky to have a class that made ​​me fall in love with this work. Theory and practice were key elements for me,” he says. “Dr. Denis Jackson was a great mentor for me. I am very grateful to him because he opened the door for me so that I could do an internship at the News Journal, the newspaper I had bought as a child in Rodriguez Food Market. You cannot imagine the tremendous experience this was.”

Antonio has several years of experience working in local newspapers and has a great passion for writing and communication. “I was fortunate to work in a major newspaper, the Dallas Morning News in Texas, 40 hours a week, in a very, very big newspaper. I had articles on the cover. It was like living a dream; it was surreal to see it was possible. So I knew that was the job for me.”

His first experience as a reporter…

communications, journalism
Previous Post Video: No justice to be found for undocumented immigrants killed by U.S. Border Patrol agents
Next PostChico Vive: The Legacy of Chico Mendes and the Global Grassroots Environmental Movement

Video: No justice to be found for undocumented immigrants killed by U.S. Border Patrol agents
Comment
Chico Vive: The Legacy of Chico Mendes and the Global Grassroots Environmental Movement