Latina Lista: News from the Latinx perspective > Local News > Southwest > For Arizona Latinos, endorsement of candidates must go beyond a last name

For Arizona Latinos, endorsement of candidates must go beyond a last name 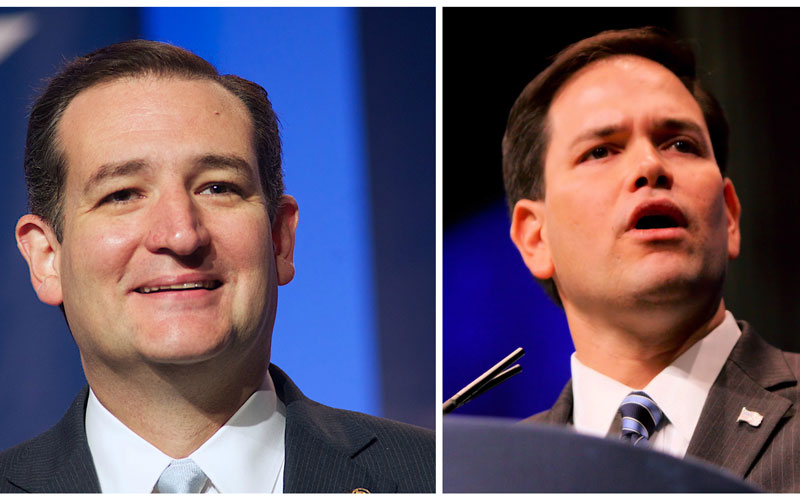 PHOENIX – It will take more than a Hispanic name like “Cruz” or “Rubio” to win over the country’s largest minority group, advocates say.

While Republican hopefuls Sen. Ted Cruz of Texas and Sen. Marco Rubio of Florida are both sons of Latino immigrants, some of their policies differ from the beliefs of most Latinos in Arizona and throughout the Southwest, experts say.

For voters in Arizona, endorsing a candidate needs to go beyond having the shared identity of “Latino” or “Hispanic,” said Cristian Avila, a state coordinator for Mi Familia Vota, or “My Family Votes.” This matters for both the Republican and the Democratic parties.

“It doesn’t really matter whether (the candidates) are Latino,” Avila said. “(Voters) are interested more in what they’re saying rather than their last names.”

That Hispanic voter base is becoming “a lot more knowledgeable” each year, he added. It’s also growing rapidly — a record 27.3 million Hispanics are eligible to vote in the U.S. this year, up from 23.3 million from the last election, according to estimates from the Pew Research Center.

The Arizona primary election is March 22.

Nearly 20 percent of registered voters in Arizona are Hispanic, according to a 2015 study from the Arizona Hispanic Chamber of Commerce. Of these registered Hispanics, nearly half are registered Democrats; only 15 percent register as Republican.

The issue of immigration is what sets Cruz and Rubio — and, in many ways, the Southwest and Florida — apart, experts say.

Both Cruz and Rubio are sons of immigrants. Rafael Edward “Ted” Cruz was born to a Cuban father in Canada. Both of Rubio’s parents emigrated from Cuba before Fidel Castro took over the country.

Undocumented immigrants from Cuba are treated under the “wet foot, dry foot” policy that can lead to residency, unlike crossing the U.S.-Mexico border does. Some 47 percent of Cuban registered voters say they lean with the Republican Party.

But the majority of Hispanics in Arizona and throughout the Southwest are of Mexican descent.

The candidates’ stances on immigration have shifted over the past few years. Rubio was a member of the bipartisan “Gang of Eight” that pushed a comprehensive immigration reform bill through the Senate in 2013, only to see it stall in the House. HNow, Rubio has used his campaign to hammer on Donald Trump, calling him a “con artist” and questioning Trump’s conviction in his statements about building a wall along the U.S.-Mexico border.

“I hear him talk about immigration, this is a guy that used illegal immigrants to build the Trump towers,” Rubio said on Super Tuesday. His platform pushes to deny Syrian refugees and cancel President Obama’s executive actions on immigration.

Cruz similarly advocates for building a wall and increasing the number of Border Patrol agents. Commonality in stances across candidates is common when vying to win party representation, said Lisa Magaña, an associate professor at Arizona State University’s School of Transborder Studies.

“What’s going on right now is (candidates) trying to get the party nomination,” Magaña said. “They’re saying whatever they need to say to get elected. So this anti-immigration agenda is what’s working right now.”

Candidates sticking to the party platform regardless of ethnicity is nothing new, Magaña said.

“This is kind of consistent for all people-of-color candidates,” she said. “They have to align with what their party wants, because the party is the one that is backing them. They can’t really be explicitly Latino or black or whatever, because it’s the party that ultimately has the most influence on their platforms and agendas.”

Latinos are historically conservative on certain social issues, a result of religious and close family upbringings. Candidates such as Rubio and Cruz have benefited from this in past elections, Magaña wrote on Tuesday. But because immigration has been the hot-button issue for the remaining GOP candidates, it becomes difficult for the two candidates to represent the larger Hispanic voter base.

“We’re sad the Republican Party hasn’t figured out a way to reach out to Latinos, to reach out to what matters to them,” Avila said. “Both parties need to understand that if they want the Latino vote, they have to really line up with our values.”

Still, Rubio remains the preferred candidate among Republican Latinos, with 27 percent of the support, according to a recent poll of 1,200 voters by Univision and The Washington Post. Trump is the runner-up with 22 percent, and Cruz comes in third with 19 percent.

Hispanic voters align more with the Democratic Party by a large margin, according to the survey. Yet 35 percent of the Hispanic voter base is still undecided, leaving an opportunity for candidates to attract additional voters.

But Trump remains the front-runner on the Republican side and has strengthened his lead in recent contests. He won seven of the 11 “Super Tuesday” states last week, with Cruz winning three states, including his home state of Texas, and Rubio winning Minnesota.

Cruz and Trump split four states over the weekend – Kentucky and Louisiana to Trump, Kansas and Maine to Cruz – while Rubio picked up Puerto Rico. Four more states are up for grabs today – Hawaii, Idaho, Michigan and Mississippi.