For Latinos, Meriden, CT Has Reached The “Tipping Point” 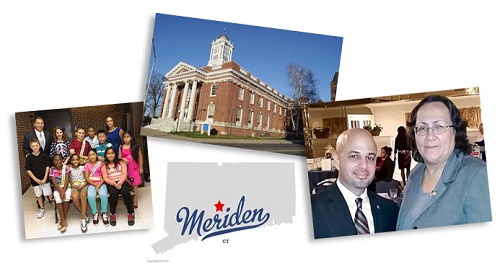 After more than 60 years of migration from Puerto Rico and other Spanish-speaking countries, and an ongoing struggle to secure economic prosperity and to have its voice heard in local government, leaders within Meriden’s Hispanic population say a tipping point has been reached.

“We have been the people outside the room; now we are in the room, making decisions for our people,” said Miguel Castro, a Puerto Rico-born Democrat who is the only Hispanic on the City Council. “We are involved as leaders in politics on the state and local level, as leaders in the business community and in education” Castro said.

About a third of the city’s 60,000 resident are Latinos and this population, which had mostly been Puerto Rican with some representation from Mexico and the Caribbean during the 20th century, now includes many newcomers from throughout Latin America and the Caribbean islands.

What is happening in Meriden, Castro observes, is the rebranding of the city as a diverse community where opportunity exists for everyone. “As Latinos, we can become a tremendous force to drive this transformation process,” he said.

City leaders acknowledge that there has been a disconnect between officials and the Latino community and are focusing on changing that, said Paola Mantilla, an economic development associate for the city. “Latinos play a large role in the development and future of Meriden,” she said. “More and more you will see bilingual personnel and materials,” she said, noting that the city has a website, Meriden 2020, designed to inform people of everything that is happening.

For Pablo Soto, a Hispanic Republican leader on the state level and former Republican candidate for the state House of Representatives, Meriden was…