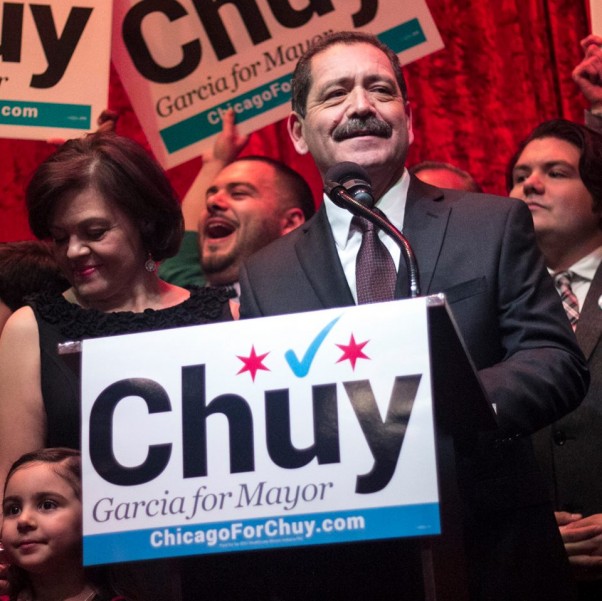 Garcia’s supporters filled up the Alhambra Palace restaurant on Tuesday night ahead of the runoff announcement, anxiously watching the poll numbers come in on the big screen televisions scattered around the venue.

“There are some interesting things happening tonight,” said Marty Castro, president of Castro Synergies, LLC and a long time supporter of Garcia, said of the evening’s precinct results.

Mayor Rahm Emanuel has raised about $30 million since leaving his post as the White House’s chief of staff to run in the 2011 mayoral election. Of that amount, $15 million was raised specifically for the election on Tuesday. Using that sizable financial advantage the incumbent mayor was able to spend about $1 million on television ads during the final week of the campaign and funnel about $2 million from his Super PAC to attack his City Council opponents in their races. All this money was used to project a carefully crafted image of invincibility by the Emanuel campaign.

To contrast, Garcia was only able to afford to start running TV ads until less than two weeks before the election and instead relied on radio “get-out-the-vote” ads, solidifying his support from Hispanic voters and hosting handshaking events across the city…

Previous Post In only five years, Latinos will account for over 40% of the increase in U.S. employment
Next PostRecognizing Women Leaders at Community Radio Stations in Guatemala

In only five years, Latinos will account for over 40% of the increase in U.S. employment
Comment
Recognizing Women Leaders at Community Radio Stations in Guatemala