Going hungry for a need of transplants 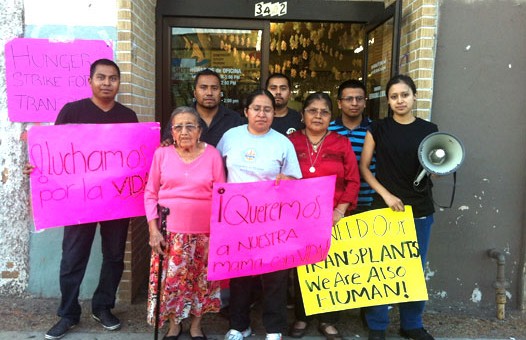 CHICAGO — After successful negotiations with the University of Illinois at Chicago Medical Center and Northwestern Memorial Hospital, a group of 14 immigrants, along with a hundred supporters, continued their hunger strike at Christ Medical Center in Chicago on Aug.7. This is their second week to strike against discriminatory health care practices that deny undocumented and uninsured patients a place on organ transplant waiting lists.

“We will not allow Christ Medical Center to continue their unethical and immoral operation by rejecting people without documents and the poor,” said Father Landaverde, organizer of the hunger strike. He said that they will move their camp and occupy the public space in front of Christ Advocate Medical Center until the hospital agrees to a meeting and begins a negotiation process.

The group met with the Christ Medical administration to deliver its message. According to Oscar Balbuena, one of the hunger strike organizers, the administration said that they will try to work together with other hospitals, such as Loyola Hospital, UIC Medical Center, Northwestern and Rush Hospitals to sit down to discuss the issue.

“We organized this strike because the hospitals stopped the commitment that we had last year,” said Landaverde. “Last year we got a new agreement to come to Northwestern. They rejected us and did not take anybody who is undocumented for liver or kidney transplants. We need to change the whole system in the state of Illinois. It is a moral responsibility for all hospitals. People are dying.”

Tanya Reyna, one of the protestors, has been on a hunger strike for seven days now. She came to fight for her grandmother who needs a kidney transplant. She explained that when her grandmother was admitted to Cook County Hospital she wasn’t initially told she needed the transplant and after the family kept trying to find out the truth, they were told she can’t be on the waiting list because she is uninsured and not a citizen. “Northwestern is one of the only hospitals in Chicago that can help us,” said Reyna.

“When a supposedly Christian hospital is responsible for deporting the undocumented and leaving the poor to die, all our communities should unite to hold them accountable,” said Landaverde.

Blanca Gomez from Portage Park took part in the protest because she needs a kidney transplant. She has needed the transplant for three years now after she was diagnosed with a kidney failure during her pregnancy at UIC Medical Center. She was rejected to be put on the waiting list because…

Finish reading Going hungry for a need of transplants