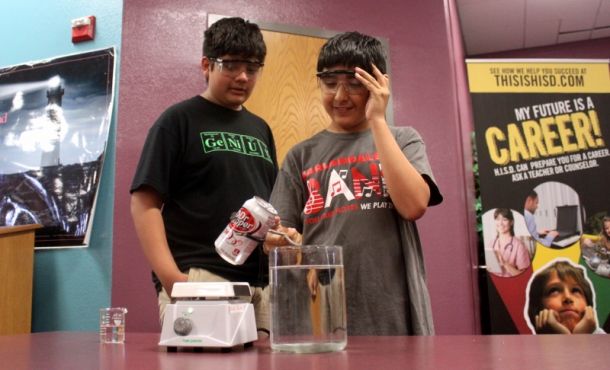 Despite it being the first day of class, Coppola skipped the usual classroom icebreakers in favor of watching a short TED (Technol­ogy, Entertainment and Design) Talk video by Dr. Angela Lee Duckworth. The video analyzes the role of grit, or perseverance in leading a successful life.

Coppola and Duckworth argued that success was not determined by talent or natural intelligence, but rather by how much work students were willing to put in.

Students practiced breathing exercises before standing in front of their peers to explain their own motivations and goals for complet­ing the speech class.

Speech 1311-152 marks the first college course for the first class of Harlandale STEM, who are working to earn both an associate’s degree and a diploma when they graduate from high school in 2018.

“I’m here because I’ve always been interested in the sciences,” Ryan Ramos, a freshman student said during class. “I would like to go into forensics. I’m not sure what I want to do after that, but I think I’ll learn what I need here.”

Ramos is one of the 110 fresh­man students who applied and were accepted into the program. Students were required to submit a formal application and a written essay explaining their motivation for joining the program, but the biggest determining factor for ac­ceptance was showing an interest in science, technology, engineer­ing, and math (STEM).

According to data from the U.S. Bureau of Labor Statistics, em­ployment related to STEM fields – science, technology, engineering and mathematics are expected to grow by more than nine million jobs between 2012 and 2022. STEM employees are already in demand, but the required training and education make the positions difficult to fill.

Although there are seven other similar schools throughout the state of Texas, this is the first STEM early college high school located in a large metropolitan area.

“The main focus for our students is on mechanical engineering and then the biomedical field, because that’s where the focus for jobs needs to be in San Antonio,” Dr. Eddie Rodriguez, the principal for Harlandale ISD STEM said. “We want to give the students an oppor­tunity to excel in the job market.”

According to the City of San Antonio Department of Planning & City Development, more than 87 percent of Harlandale ISD students are considered economi­cally disadvantaged, and nearly 12 percent of students drop out each year.

Schools like STEM hope that the specialized courses and immersive learning approach will keep the students in school.
The majority of the students in the speech class described their families as being their biggest motivation and obstacle for com­pleting the course and graduating from the program.

“I want to help my parents save money,” Jazmine Prieto, a fresh­man student said. “I hope I can.

I think Angela Duckworth was right, failure is not permanent.”

The STEM high school is cur­rently undergoing construction in the Harlandale Memorial Stadium area, and is expected to be com­pleted by mid-summer 2015. In the meantime, students complete their courses in temporary class­rooms located on the Frank Tejeda Academy and buildings on the Palo Alto campus.

“You have to work hard to be successful,” Ramos added. “There’s still a lot of things that could prevent me from getting where I want, but I plan on work­ing hard and making a better future.”