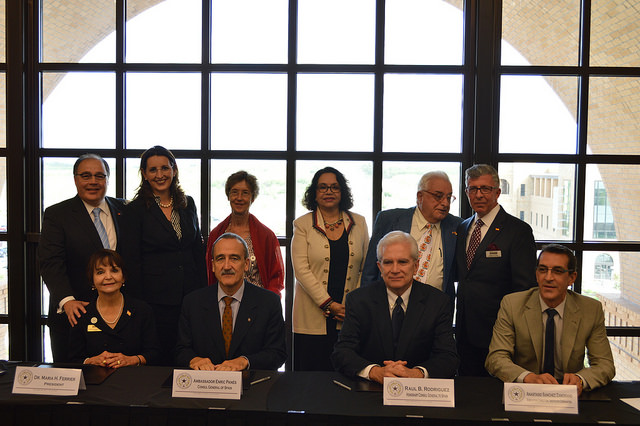 Education and culture are the precursor to creating and main­ taining international relationships, and Texas A&M San Antonio has hit it spot on. The campus has made an international partner and friend with the country of Spain, teaming up with the Instituto Cervantes to bring top­tier level Spanish classes to the school and community.

Founded in 1991, the Instituto Cervantes is a non-profit part of the Kingdom of Spain and is the largest institution in the world to teach Spanish. They work closely with Latin countries of the world, including Chile, Colombia, Gua­temala, Mexico and Peru.

With the partnership, San Anto­nio has become a “bastion” of the Spain’s cultural diplomacy and a re­-engagement with the country and language.
“Spanish symbolizes the new landscape in America, or rather the rebirth of one. We were not always a minority in this land. We became one,” Raul Rodriguez, Honorary Consul of Spain in San Antonio said. “We are growing four times as fast as the general population; ten times as fast as non­Hispanics. It is important for us to embrace and be able to speak the language fluently.”

In 50 years, a third of America will be Hispanic and before the end of century it will be the largest Hispanic nation in the world, according to Rodriguez.

Instituto Cervantes has a pres­ence at Harvard University. How­ever, Texas A&M San Antonio, is taking the reins and pioneering a new concept that will integrate Instituto Cervantes into the classrooms and degree programs, in­cluding Education, Business, Art and Science.

“Students that are studying to be teachers in bilingual education and our own teachers are now going to have the opportunity to learn from the very best Spanish teachers in the world,” Maria Hernandez Fer­rier, president of Texas A&M San Antonio said.

Starting next semester, teachers from Spain will take residence in the Alamo City and provide in­-house classes to students and faculty at Texas A&M San Anto­nio as well. The hope is to create a degree specializing in Spanish in the near future.

“We know there are other insti­tutions and universities that teach Spanish. We are not competing with them,” Anastasio Sanchez Zamorano, executive director of Instituto Cervantes Albuquerque said.

“We are trying to offer something they aren’t offering; some­thing that will fulfill the needs of the community.”

“We need people that not only speak conversational Spanish, but professional Spanish as well. Those things are going to be very, very important in the near future,” Ferrier added. “We are very honored and privileged to be the first university to offer this to the community.”

In addition to offering classes to students, A&M San Antonio intends to extend the opportunity to the community through semi­nars and open classes that will be open to the public and businesses.

“We look at education, business and culture; all of those areas in­cluding medicine and engineering. The learning of the correct Span­ish for those particular professions are incredibly important as Span­ish is becoming more and more the world language,” Ferrier added.