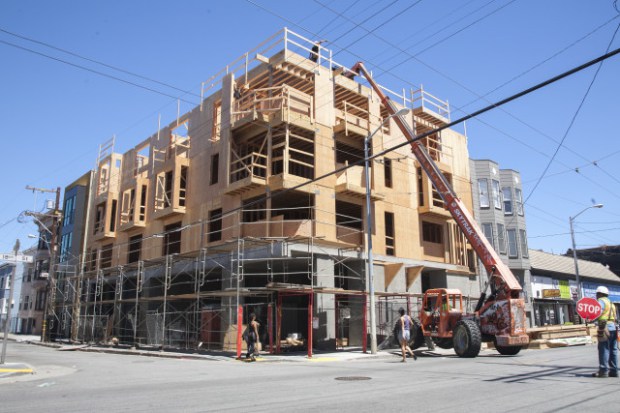 Walking on San Carlos between 18th and 19th streets, 76-year-old Jerry Avila points to changes he has seen on the block where he has lived for more than 30 years. For most of that time little changed, he said.

But in the last two years, the hodgepodge block of businesses and Victorian-esque, single family homes with chipped paint has been transformed. “Everyone who used to live here is gone,” said Avila.

The family-owned muffler shop, All Muffler Auto Service at the corner of 18th Street, sold in late 2013 and in May of this year groundwork was laid, walls were erected, and the process of completing a 5-story, 16 unit condominium complex was well underway. By the end of the first week of August, the fourth floor was nearly finished.

At the other end of San Carlos, tenants, including six who were disabled, were evicted from the six unit, 3-story building, in 2013 by Elba Emelia Borgen and Laura Rodgers, who made the anti-eviction coalition’s list of serial evictors. Renovations are ongoing.

Avila stops in front of another new, contemporary place nearby. It’s a new 5-story building with three units that went up in 2011. The exterior is modern, picture-esque, and in contrast to the rest of the older homes on the block, truly sticks out. One of the just under 1,000 square feet two bedrooms, two bathrooms here sold for $910,000 in 2012.

Crowdfunder: Telling the story of minority winemakers in Oregon
Comment
Entrepreneur & Visionary Giving a Voice to Latinas in Tech