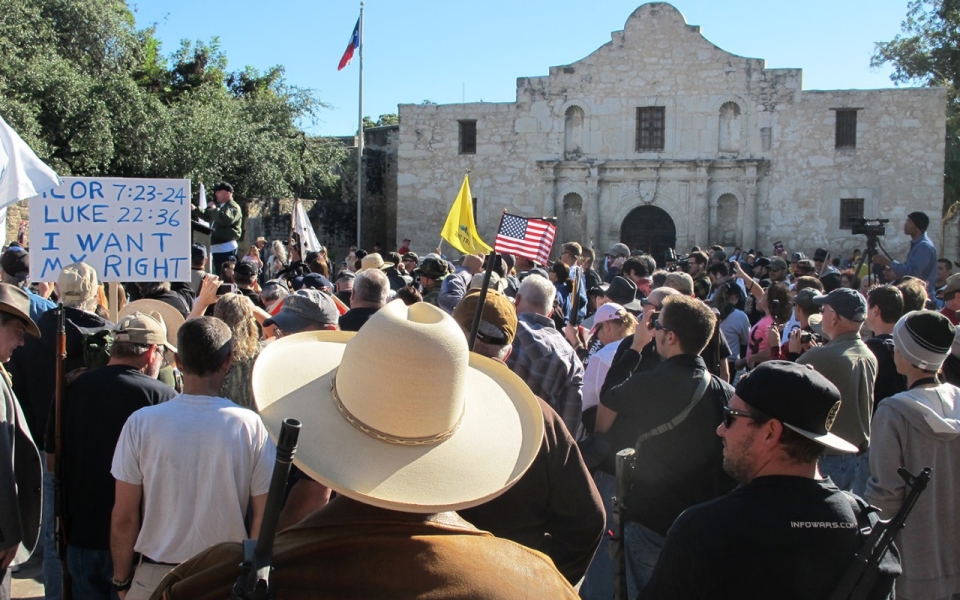 “Patterson’s decision, taken unilaterally and without informed consultation, opens up a place of reverence to dozens of gun carrying activists. This violates the sanctity of the grounds and values indigenous people hold most dear. We believe Mr. Patterson’s failure to obtain informed consultation with San Antonio’s Indigenous American representatives needs to be questioned”.

In 2011 the Texas General Land Office took over control of the Alamo from the Daughters of the Republic of Texas. Commissioner Patterson approved the gun rights’ rally scheduled to be held Saturday morning Oct. 19th from 10:00 a.m. to 2:00 p.m., and is also scheduled to be a speaker.

Castillo added, “It appears to us that this decision is self-serving.” Patterson recently announced his candidacy to run for Lieutenant Governor. “To us there is an appearance of impropriety”. Castillo feels that as a Mission San Antonio de Valero custodian, it would be inappropriate for Patterson to leverage the Mission Church’s visual recognition and history in an event specifically aimed to appeal to Texas Conservatives.

From 1718 through 1793 Mission San Antonio de Valero (The Alamo’s) historic function was as an Indigenous and Spanish Mission. During this time-frame thousands of Indian families lived, worked, died and were buried adjacent to the Church. This was customary at Missions throughout the Americas.

Many Mission Indians were under the belief that the closer one is to the altar of that church, the more sacred and spiritually significant the ground.

However, Castillo said “recognition in itself is not sufficient.” Adding, that a request to determine if Federal laws will be violated Saturday appears to be an appropriate next step. Intertribal Leaders will document by video the event, and will organize a press conference and peaceful protest to share their concerns and points of view.

Castillo said, “This is just not what we want our children to witness.” Mission Indians did not carry guns, were not allowed to drink alcohol on the Mission grounds and certainly would have the common sense and decency not be caught with either near their ancestor’s sacred place of burial.

Castillo added, “It may serve Mr. Patterson well to study the Yaqui’s last 500 years of history”.

Cultural clashes with the Spanish started in 1533 when Captain Diego de Guzman led an expedition into Yaqui lands in search of gold and silver. The story is told that a large number of Yaqui warriors confronted Guzman and his soldiers.

The leader of the Yaquis, a tribal elder, drew a line in the dirt and told the Spaniards not to cross it. The request was violated and a battle ensued. The Spanish retreated with many deaths on both sides and thus began 400 years of armed and devastating conflicts where many thousands of Yaquis were brutally massacred and enslaved. Scholars believe that around 1900 over 5,000 Yaquis were slaves and being forced to do hard labor.

Castillo says that what was and still is most important to the Yaqui people is to protect their culture and way of life.

Today San Antonio’s indigenous groups are looking for dignity and inclusion. For Castillo, “inclusion means we want a say and we believe consultation on sensitive issues is mandatory”.

It appears many others such as former Daughters of the Republic of Texas member Erin Bowman, like Castillo, feel permitting armed activists at the Alamo is a bad idea.

Ms. Bowman said: “I am a gun owner with a concealed weapons license and I do not think this is a good idea. Charlie Calderon stated: “I am a life member of the NRA and I am totally opposed to having a gun rally or any kind of rally be it political or not on these sacred grounds.”

These types of remarks please Castillo, who hopes this unfortunate event will mark a turning point where Indigenous American points of view are better understood and provided their due consideration.

Castillo adds, “It would be wonderful to have the opportunity to share our history and narrative on the Mission San Antonio de Valero site, in a dignified and proud way along with everyone else.