La Prensa de San Antonio.- Since taking the helm as CEO of Girl Scouts of Southwest Texas in 2009, Anna Maria Chávez has overseen a period of substantial growth for the local council, now serving more than 21,000 girls in a 21-county region. As top executive, she oversees a budget of $5.5 million and a team of 60 full- and part-time staff. 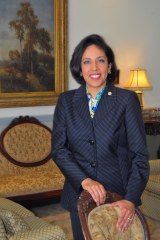 Such gains didn’t come by accident, but largely attributable to a new direction for the organization offering a more flexible model for Girl Scouting participation. Called Pathways, the new approach allows girls to participate based on their lifestyle and time availability, be it for a few weeks or a few months.

Since taking the helm as CEO of Girl Scouts of Southwest Texas in 2009, Anna Maria Chávez has overseen a period of substantial growth for the local council, now serving more than 21,000 girls in a 21-county region. As top executive, she oversees a budget of $5.5 million and a team of 60 full- and part-time staff.

Recently, the organization – set to celebrate its centennial anniversary next year – put the new Pathways option into practice, partnering with the San Antonio Independent School District to recruit new members. Expecting 25 recruits from a pair of the district’s high schools to join its newly launched Gamma Sigma club, scouting officials instead signed up more than 260 girls eager to join.

Girl Scouts is more than selling cookies door to door, one of the group’s most visible community fundraising roles. Instead, the group fosters leadership skills in girls that can help propel them into the careers of their choosing, Chávez, herself a former scout, said.

To that end, the local council has forged partnerships with local businesses to spark further interest in career goals – particularly in the areas of math, science and engineering where women are underrepresented.

A graduate of Yale University, the Arizona native formerly served as Deputy Chief of Staff for Urban Relations and Community Development for former governor Janet Napolitano, who now heads the U.S. Secretary of Homeland Security. Prior to that, Chávez served as chief of staff to the deputy administrator at the U.S. Small Business Administration in Washington, D.C. and as chief of staff for the SBA’s Office of Government Contracting and Minority Enterprise Development.

She recently spoke to La Prensa about issues related to Girl Scouts in particular and the role of women in society in general.

LP: What prompted you to come to Texas and head up the Girl Scouts council?

Chávez: It was a calling. I was appointed to the position two years ago, and have worked since that point in building a team of staff and volunteers. What we’ve started to do in the last two years is flesh out pathways for girls.

The one way for girls to join Girl Scouts is to join a Girl Scout troop. That will always be a part of our organization, but we also recognize girls want choices and want to engage in events or different topics like science and technology.

We also do more long-term opportunities called series – in dance for example where they would take ballet, tap and jazz – for six weeks. At the end of the six weeks, that could be their Girl Scouts experience for the year and later join a Girl Scout summer camp.

During spring break, we have a camp on robotics, so girls can take two residence camps – we have one in Comfort and Utopia, Texas – and also learn how to ride horseback.

There is a really diverse menu for girls to do different things.

LP: Is this Pathways program to be replicated nationally?

Chávez: It is a template that will be replicated throughout the country, but we were one of the first to establish and develop those pathways. That’s why we’re seeing such an increase in participation. From May 30, 2010 to May 30, 2011, we’ve seen a 32 percent membership increase. Right now, we have 21,162 girls in 21 counties.

LP: We were impressed with the success you had in partnering with SAISD. Did you anticipate that success or did it take you by surprise? And how does that success bode for the future in terms of partnerships with other school districts?

Chávez: I’m not surprised that girls are intrigued by it because I went to the girls to ask what they wanted to see. It was a girl-generated idea. I really feel every girl regardless of age should be part of our organization. We just needed to update some of the programming.

LP: Why was the name Gamma Sigma chosen?

Chávez: I had the opportunity to join a female fraternity at Yale University, and I remember how powerful that was for me. Never having had a sister growing up, I suddenly had 25 sisters who supported me and really helped me get through college. That’s how I came up with the Gamma Sigma concept.

LP: My understanding is a great part of Gamma Sigma’s development was based on Girl Scouts-conducted research.

Chávez: What our research has found is that girls like an environment where they feel they can learn in safe environment with other girls, which also allows us to bring in female role models.

Also, girls think of leadership in a different way than boys. They view leadership as an opportunity to convene people and solve a problem versus from a boy’s or male perspective of positional power where they are in charge of an organization and leading the charge.

Girls are much more apt to bring people together and see their role as more of a problem solver and mediating issues versus positional power.

LP: What is the value of enrolling in Girl Scouts? What types of leadership skills are acquired?

Once blamed for the housing bust, Latinos now looked at saving housing industry
Comment
I have a confession -- I've helped undocumented immigrants