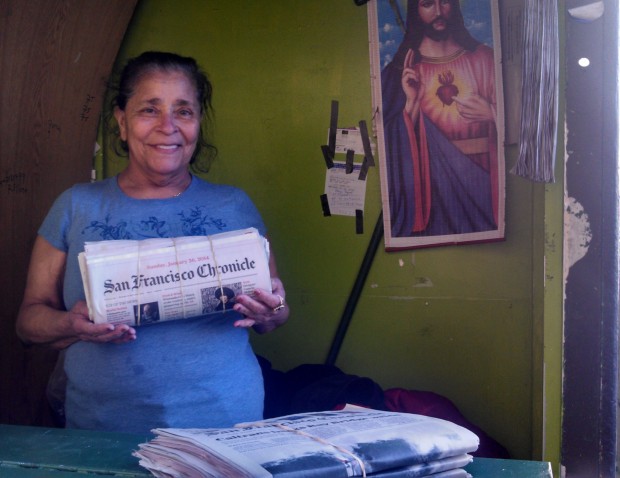 Every morning at 4 a.m., Rosa Campos’ alarm insistently buzzes. She unfurls, shakes the sleep from her limbs and dashes out of her apartment at 3rd and Kirkwood to catch the first bus of the day. By 5:05 a.m., she can be found inside the newsstand at 16th and Valencia, hawking papers to the remaining few who read news the old-fashioned way.

The stand, which has been in its Mission location for decades, is a simple affair. The interior is coated bright green, save for a few patches of white where the paint has chipped off. Near the back corner, a poster of Jesus dangles in front of a long wooden stick, which Campos routinely waves around to ward off the “locos” who prowl the streets and bother her when the neighborhood is still rising with the sun.

These days, Campos says she deals with the “locos” as often as the customers. In the past several years, the Chronicle-operated newsstand has seen a dip in sales as paper subscriptions throughout the city have steadily declined. When the 72-year-old Salvadoran native began working at the stand three years ago, she would typically sell around 50 papers a day. But now that the newspaper has nixed the popular TV guide, her hard-copy sales have dropped to between 20 and 30 copies a day — with a few exceptions…