San Antonio.- San Antonio’s María Látigo de Hernández is featured in the new exhibit at the Bob Bullock Texas State History Museum, “Women Shaping Texas in the 20th Century.” The exhibit opened a few weeks ago and includes a silver Aztec sun calendar that Mexican President Lázaro Cárdenas presented to Hernández in 1939 when she traveled as a goodwill ambassador representing a coalition of local groups.

Hernández (1896-1986) was a pioneer radio and television personality, as well as a tireless civil rights leader who campaigned passionately for better education, access to healthcare, and social opportunities for the Mexican-American community. Her family fled the Mexican Revolution in 1914, and she and her husband, Pedro Hernández Barrera, moved to San Antonio in 1918 after he was drafted for World War I. Armistice was declared before he shipped out, and instead they opened a grocery store and bakery on the city’s Westside where they raised their family. 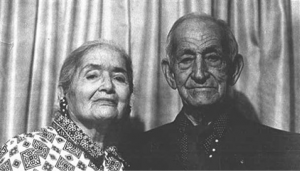 She became a midwife in 1927 and delivered babies in the community until the 1940s. Hernández established La Asociación Protectora de Madres and raised money to build a maternity clinic that provided free prenatal care. In 1929 she and her husband founded La Orden Caballeros de América, one of Texas’ earliest civic and civil rights organizations. They were close friends with Lic. Alonso Perales, who founded LULAC, and worked with Eleuterio Escobar and La Liga de Defensa Escolar to document the deplorable condition of schools for Mexican-American children.

On the patio of Sidney Lanier High School in 1934, she rallied a crowd to protest the unequal treatment of San Antonio’s children and helped persuade the state government to intervene and improve the schools.

An inspirational orator, Hernández hosted one of the earliest Spanish-language radio programs on KABC in San Antonio during the 1930s. Her work continued…