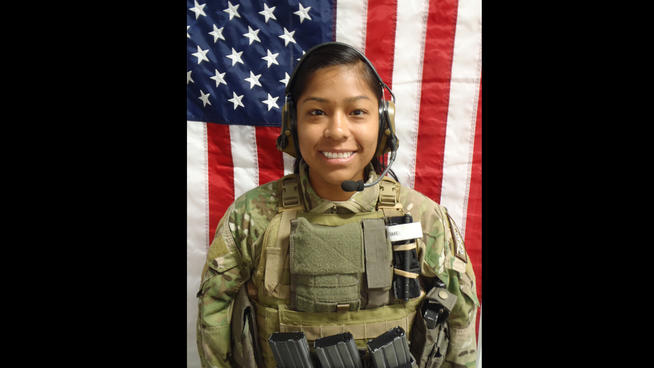 Moreno, 25, was killed by a bomb October 6, when her unit was attacked during a raid to a Taliban base. She was awarded a Bronze Star posthumously for bravery.

But perhaps the greatest honor she received was the one she received from Logan Heights veterans of war, when they paid their respects to one of their own on Friday, October, 11th.

Dozens of Logan Heights veterans from Vietnam, Iraq, and Afghanistan, came together at the Logan Heights Veterans Memorial, in Chicano Park, to remember the sacrifice this young lady made while fighting for her country.

“Today we’re here as a single unit to honor this young lady,” said Juan Manuel Crespin, spokesperson for the Logan Heights Veterans Memorial Committee, which organized the event. “I’m a parent. The last thing, God forbid, is that anything should happen to our children. Our children are sacred. They are not supposed to go before us.”

Moreno’s mother, Maria Cordova, arrived at the memorial crying, in company of her three other children, one of them also in the Army.

“All I want to say is that the pain I feel is very big,” she said in Spanish. “Jennifer always felt proud of her work. Thank you to all for the attention you’re giving my daughter.”

During the service, San Diego Councilmember David Alvarez, gave a plaque to Cordova thanking her, for her daughter’s service…

Video: Documentary challenges world to wake up to the future climate change will bring
Comment
News Analysis: Are Immigrant-Aid Organizations Ready for Reform?