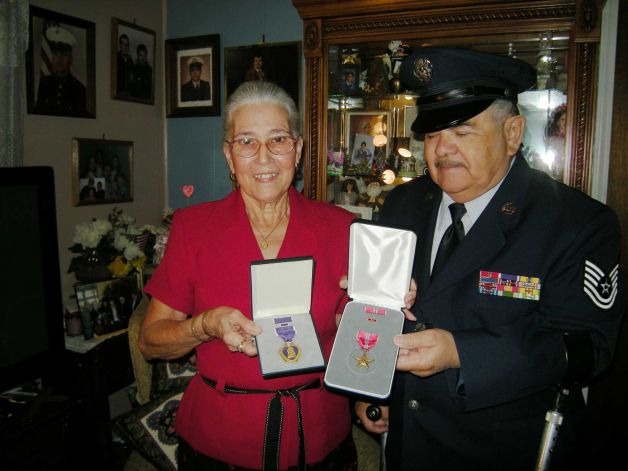 “Better late than never” is retired Tech Sgt. Plácido Salazar’s motto regarding the acceptance and recognition of his awards for his service in Vietnam, 48 years ago.

State Sen. Carlos Uresti presented a State Resolution to Salazar, honoring the Air Force veteran for his Bronze Star (approved in 2000) and his Purple Heart (approved just last year). He was also presented a Resolution from the House of Representatives as well as a Texas flag by Rep. Oscar Longoria.

Salazar struggled for recognition after he was wounded during an enemy artillery barrage at Bien Hoa Air Base, Vietnam, in 1965. “I did not save anybody’s life,” Salazar said modestly. “I only risked my life to half-carry two of our sedated men to the bunker. Two young airmen got blasted away by a mortar round just a few yards away.”

Salazar submitted his paper-work to receive his awards, but said that he was ignored and his application torn up simply because he is Hispanic.

“It’s wrong being cheated out of something rightly deserved,” he said.

“Sergeant Salazar has shown great patience in waiting for an honor he was due so long ago, but he has also demonstrated great resolve,” Uresti said. “The resolution recognizes both his valor and his perseverance in the face of bureaucratic delay.”

Salazar served in the Air Force from 1956 to 1976, when he was honorably discharged and retired at Kelly Air Force Base. He was formally presented his medals at Randolph Air Force Base in March, and again with his family present in his hometown of La Villa on April 27.

“I’m just one of few who got recognition,” Salazar said. “A lot of people were denied or never submitted an application.”

“It’s nice to finally get my awards. It was a very moving and rewarding experience,” he added. “I encourage everybody to fight for what they deserve.”