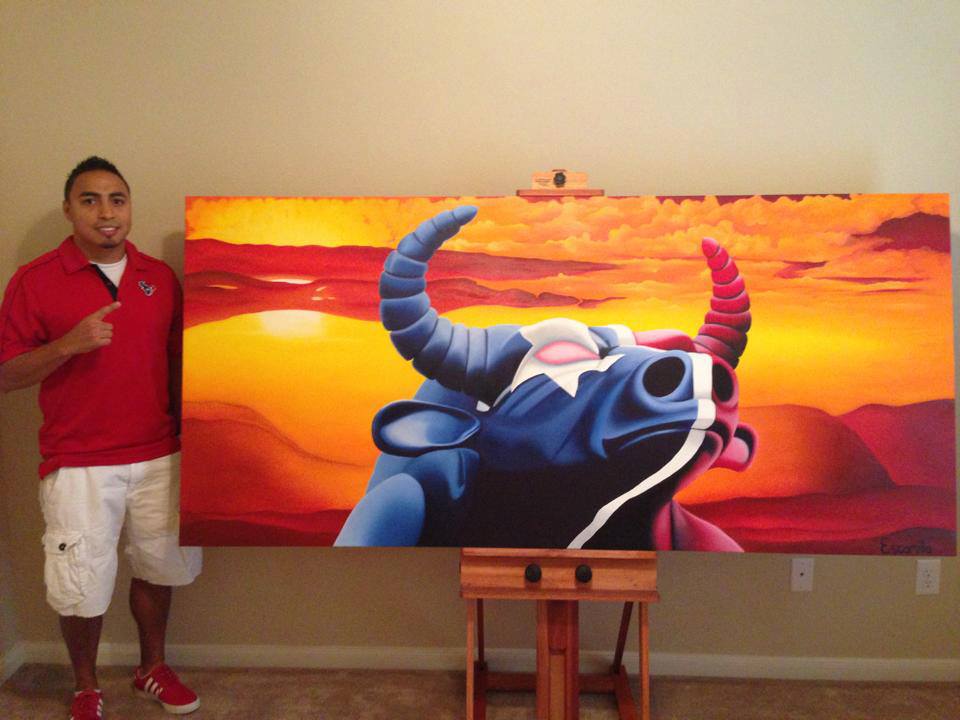 In December 2011 award winning Katy ISD art teacher, Anthony Escamilla, posted a picture of an empty woodframe on his Facebook page with the caption “Future Houston Texans Mural”. The posting kicked off what would become a two year project and turn Escamilla into a Houston social media sensation.

Escamilla has been a die-hard Houston Texans fan since 2002, and names JJ Watt as the player he’d most like to have at his BBQ.

As both an art teacher and football/coach at Seven Lakes Junior High, Escamilla concentrates on his students’ progress during the school year and doesn’t have a lot of time for personal projects. He worked on the mural on-again, off-again for over two years.

Escamilla wanted a quality piece and had to get the shades just right to avoid copyright issues.

“The (online) picture is nice but in person its details are more visible,” said Escamilla.

Texans fans are clamoring for Escamilla’s painting as their Facebook cover photo.

When the 3 ½ x 7 foot oil on canvas painting titled “Road to Superbowl” made its Facebook debut, Escamilla and his girlfriend thought 100 likes would be ambitious. In the last 24 hours, the picture of Escamilla standing next to his painting has reached over 80,000 people and garnered approximately 7,000 likes, comments and shares.

“I knew I was going to change the world with this one, but wow I never thought it would go viral and get this much attention,” said Escamilla.

It took some urging from family friend, Hector Montes, to convince Escamilla to forward the photo of his painting to local organizations so they could share it on social media. Go Tejano and Tejano Music Fest both shared it on their Facebook pages where it was an instant hit and comments started pouring in from even Dallas Cowboy fans.

“Nice work.. well respected for your great skills. Wish it was a Cowboys drawing though. lol,” said Kevin Lee on the Tejano Music Fest fan page.

Escamilla has been offered between $100 – $10,000 for the painting since it went viral, but has mixed emotions about selling it…

Featured Photo: Anthony Escamilla graduated from Texas A&M- Kingsville with a degree in fine arts. The El Campo native and teacher of the year is now using his talents to inspire Houston Texans fans.