Latino loses 200 pounds by ‘running for a change’ 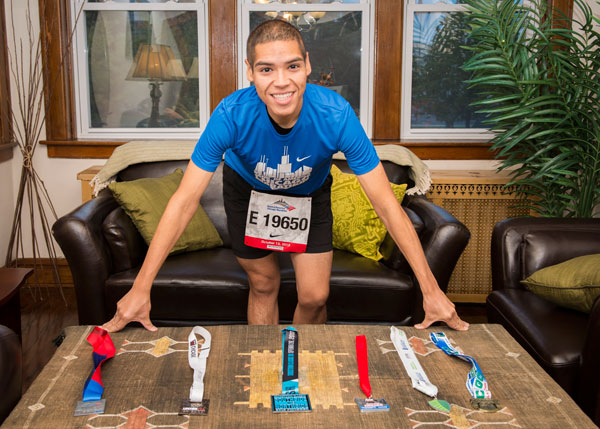 For many, losing weight and running a marathon is an impossible mission but for 26-year-old Miguel Blancarte from Little Village both changed his life. He lost 200 pounds in less than a year by eating right and running. It wasn’t until January of last year that he joined a gym and made a healthy change in his life as his health was on the line. He weighed 343 pounds.

“I did all of this on my own without a trainer, no surgery, no pills. I took it based on how I was seeing it and feeling it,” said Miguel, who broke down his training in trimesters. “After that, my lifestyle changed,” said Miguel, who continued his cardio workout by running outside. “I started running slow. I never ran before. Running half a block was the most I ever ran.”

Even though Miguel had never run before, he challenged himself every day. “It was a bit tough mentally; it was the idea to do something that I never did before,” he said.

Miguel ran his first race, Dia de Los Muertos 5 K in November of last year. “I was very happy about that. I never ran a race before,” he said. After that, he was running a race every month until a friend of his convinced him to run the 2013 Chicago Marathon. With only a few months of training, last week Miguel ran the Chicago Marathon and…

Finish reading Latino loses 200 pounds by ‘running for a change’

Video: With an elevator shaft as their canvass, the De La Torre brothers create a gateway into another realm
Comment
Research Shows Poor Children Lag Early in Language Skills