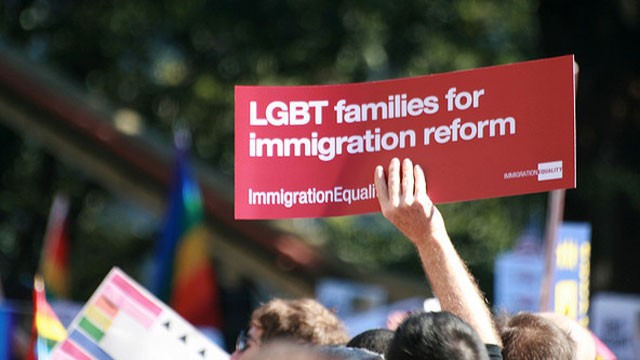 fter the neon skin-tight clothes were peeled off and the strewn banners were cleaned off the streets of Boystown, it was time to get to business. If last Sunday’s Pride Parade was a full blown celebration of the landmark achievements gays have achieved this past year, the Latino Policy Forum’s “Rethinking Immigration Reform and Lessons Learned from the LGBTQ Community” was an event to remember in what we have left to accomplish.

On June 30, the Latino Policy Forum and the Association of Latino/as Motivating Action, among others, presented their event at Columbia College to compare and contrast the progress made within the LBGTQ community as opposed to the immigration reform activism. U.S Rep. Luis Gutierrez provided the opening remarks.

Gutierrez is currently serving his eleventh term in the U.S House of Representatives and provides consistent progressive legislation to his constituents in the Illinois’ Fourth District. He helped lead the fight to ban discrimination on sexual orientation and often provides a voice for Chicago’s Latino community. His speech was a reflection of his dedication to Latino progress and social justice—it was peppered with Spanish anecdotes and breaks that were often not translated but rather sewn into his English.

Gutierrez’s opening comments were followed by a panel of professionals who gave their insights on the battle ahead for LGBTQ and Latino rights. The panelists included Kelly Cassidy, a representative of the 14th District in Illinois whose work has spanned from women’s rights to LGBTQ activism.

Mexico-native Moises Hernandez was another panelist and shed some light on his own battle with immigration reform. In fact, the first immigration case he took on upon graduating law school was…