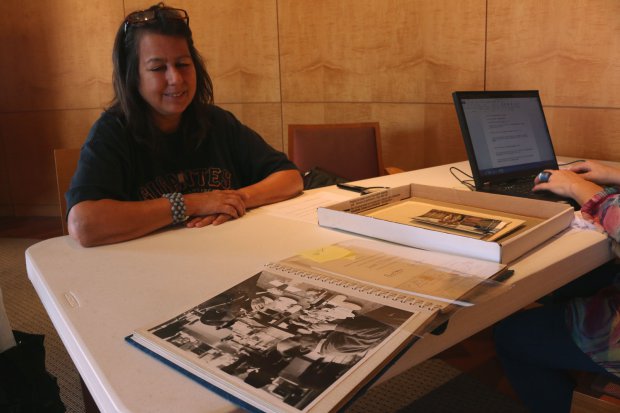 On Saturday afternoon, Susan Goldstein, the City of San Francisco’s archivist, could be found in the San Francisco Public Library’s fifth floor DIGI Center, a room for digital archiving, pouring over old, print photos with Alejandra Palos, a woman ready to donate some of her father’s photos.

Manuel Palos, an architectural sculptor, worked on projects throughout the city including the restoration of the Legion of Honor’s eight mythological creature sculptures and the ornamentation on the Neiman Marcus building downtown. Palos, a Mexican immigrant, came to San Francisco in 1966 to work as a mold maker for the Palace of Fine Arts. Despite his lack of professional experience, the lead sculptor recognized his talent and took him under his wing. Palos continued to worker as a mold maker while sculpting on the side. He eventually made enough money to take a three-week trip to Italy every year for 20 years to study sculpting and in 1984, he opened his own sculpting business, Manuel Palos Sculpture.

Now that her father is 78, Palos wants to document his life, which is why she seized on the opportunity to bring the collection of photos and documents to the DIGI Center, which ran a free-of-charge, drop-in event as part the San Francisco Latino Heritage Fair.

It was the first time the DIGI Center, which officially opened at the main branch in January, has hosted an event like this for the public at their new central location. The goal on Saturday was to help Latinos publicly document and digitize their family’s history in San Francisco.