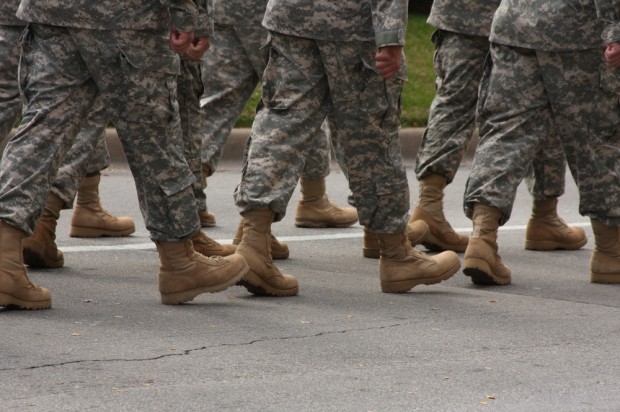 Maria Quiring’s son was just months old the day the deportation notice arrived at her El Mirage home. Despite her marriage of five years to a U.S. Air Force serviceman, Quiring was ordered back to her native Mexico.

“I was so afraid of the door,” Quiring said. “My little one was a baby. You see all this on the news so I thought they would come to my door with guns and take me and leave my kids.”

“I didn’t know if I would lose her,” said her husband Jared Quiring, a technical sergeant stationed at Luke Air Force Base.
Had a Department of Homeland Security policy called Parole in Place not found her a loophole, Maria Quiring would not be where she is today, watching her now 5-year-old son J.J. assemble a Hungry Hungry Hippos game on the floor.

Parole in Place, an unofficial policy allowing certain immigrants to adjust their legal status, started as a means of protecting citizens of Cuba, crime victims and battered women. But in 2008, under the George W. Bush administration, the U.S. government announced military families could qualify under the policy.

Maria Quiring left her home country of Mexico as a 19-year-old in 1999 when her former husband brought her to the United States as an undocumented citizen. After a year and a half, they were divorced.

Three years later, in 2004, she married Jared Quiring. She applied for citizenship, but because she entered the country unlawfully, the letter she received in 2009 notified her she would be deported and barred from returning to the United States for 10 years before she could return and apply for citizenship again.

“I was devastated,” Maria Quiring said. “My whole world was turned upside down. It meant not getting to be with my kids or husband for up to 10 years. It was chaotic.”

Military personnel are not allowed to travel to Mexico, which meant Jared Quiring would not be able to even see her.

“The first thing I did was ask my commander for permission to visit her and he pretty much said no,” he said.

It was Phoenix immigration attorney Judy Flanagan who told Maria Quiring about Parole in Place.

“This allows people with unlawful presence who have a spouse in active duty military to be granted a legal fiction saying they entered legally, circumventing having to leave and having to get the waiver,” Flanagan said.

In a letter to Congress in August 2010, former Department of Homeland Security Secretary Janet Napolitano wrote that, “On a case-by-case basis, DHS utilizes parole and deferred action to minimize periods of family separation, and to facilitate adjustment of status within the United States by immigrants who are the spouses, parents and children of military members.”

Immigration attorney Margaret Stock said that because the U.S. Citizenship and Immigration Services has no official memorandum for Parole in Place, not many attorneys know about it and not many people have utilized it. For Maria Quiring, the process turned out to be simple.

“All they did was look at my paperwork and approved my residency for one year,” she said. Then, after that, it was only three months until I had my interview (for Legal Permanent Residency).”

At the interview, on Nov. 1, 2011, Maria Quiring was approved as a Legal Permanent Resident. Two weeks later, she got her green card.

“I call it the military pass,” Flanagan said. “You have a spouse in the military and you get some special benefits. It’s totally out of the ordinary. It’s like a magic button.”

“That was probably the best news I had heard in a long time,” Jared Quiring said. “I leave in a couple months for Korea for a year. I know she’s going to be okay when I return.”

And his wife feels safe, too, knowing she’s residing in the country legally.

“I’m at peace and at ease knowing I’m safe and fine here,” Maria Quiring said. “But, I do want to become a U.S. citizen. I’m already studying for my test.”

Next year, she can apply for citizenship.

“I told my husband it’s better they messed up my paperwork the first time,” she said. “What people intend for evil, God intends for good.”