Latina Lista: News from the Latinx perspective > Palabra Final > Business > Mariluz Gonzalez — a Latina enterprise all by herself

Mariluz Gonzalez — a Latina enterprise all by herself

If you ever tune into on 98.7 FM Santa Barbara on a Saturday night between 10 p.m. and midnight, you already know who Gonzalez is and you have already enjoyed the music she plays during the show “Travel Tips for Aztlan.” 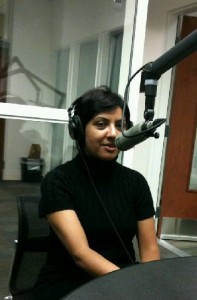 Born in the Mexican state of Jalisco, and of Mexican parents, Gonzalez and her family settled in the San Fernando Valley when she was only three years old on what she recalls as “the typical immigration story.”

“I, basically, have lived all my life in the San Fernando Valley,” Gonzalez said. “Most of my dad’s family was already here.”

At an early age, Gonzalez showed tendency and talent towards the arts, particularly, music.

“I played instruments. While in elementary school I played the violin,” she said. “Then at San Fernando High, I played the clarinet… I was part of the band.

During her high school years, she participated in the Advanced Placement program, which she considers as a big part of her decision regarding pursuing an undergraduate degree.

“Those kind of classes motivated students to pursue admission into university. They helped me a lot in achieving it so right after I graduated from high school I went directly to UCLA,” Gonzalez recalled.

Gonzalez financed her way to college, where she enrolled in Latin American Studies major, through scholarships and grants.

“At that time, there was an initiative named Affirmative Action, and I was a part of that. Even though it was highly criticized (the initiative) it was the best it could had happened to me because I was helped to attend university,” she said.

Affirmative Action was an existing program in California that according to www.definitions.uslegal.com “is the process of a business or governmental agency in which it gives special rights of hiring or advancement to ethnic minorities to make up for past discrimination against that minority.” Due to what was considered “preferential treatment” Affirmative Action was banned by Proposition 209 in 1996.

Despite her major, it was a surprise to Gonzalez to find herself working for the music industry…

Finish reading Mariluz Gonzalez — a Latina enterprise all by herself