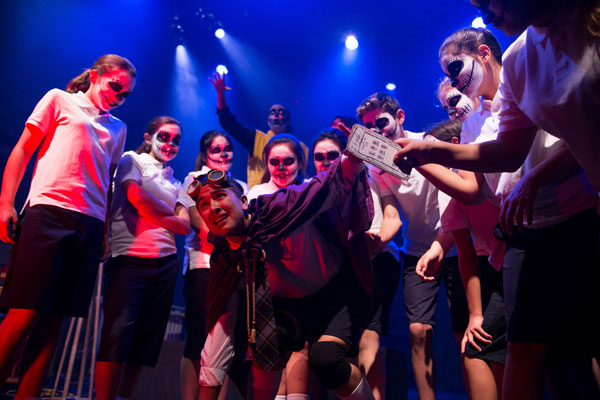 “Don Chipotle” is a new play by award-winning writer and performer Juan Francisco Villa, and is directed by Jo Cattell. Presented by terraNova, The Playground Theater, and the Chicago Department of Cultural Affairs and Special Events, the production is a fantastical adventure. Villa’s true-life story is at its core, where he addresses issues such as violence, death and the importance of family. With a wild imagination and a strong will to survive, his main protagonist and alter ego, Celestino, sets out to prove that even the weakest can survive if brave enough to believe.

In his previous production, “Empanada for a Dream,” Villa recreates bits and pieces of his childhood through use of imagery and dream and nightmare sequences. His new production, “Don Chipotle,” does all of this and much more, with a full choir, music and a variety of talented actors including Wendy Mateo and Lorena Diaz, known for their comedic project, “Dominizuelan,” and for their frequent performances in the Chicago theater scene.

In “Empanada,” a one-man show, Villa’s strengths as both a compelling writer and versatile performer shine through brilliantly. After having performed it many times over in several cities across the country including Chicago, New York and Los Angeles, “Empanada” has made more than an impression; it also made many of the “best of” lists in major cities and was recognized with several awards.

In an interview with EXTRA on his latest production, Villa made the comparison and said “Empanada” is completely about his life growing up in New York. He burst on the scene with it by opening up a Pandora box of family secrets, revealing his uncles’ drug business, the violence attached to it and how the family struggled to keep it together amidst the secrets and lies. “At first, my family was not too happy about that, but it is better now,” he said of how the family reacted to his using their lives as the basis for his plays.

When asked if Don Chipotle does the same in revealing more of the family’s secrets, he shared…