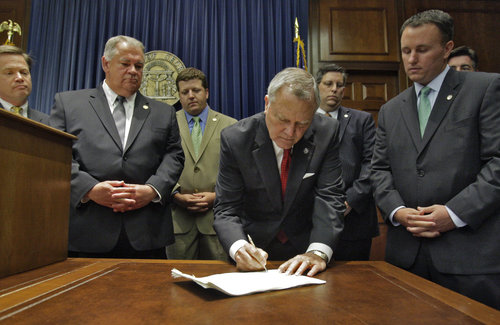 SAVANNAH, GA — Bertha Clemente-Lima has lived in Reidsville, Georgia for 20 years. She moved to the United States from Mexico in 1993 in search of a better life.

Clemente-Lima, the mother of three, has witnessed many recent changes in her community and has noticed how the ambience in her city has shifted drastically from times past.

“I enjoyed our way of life here then – it was easier,” she said. “There was less racism, people were nicer, and there were not as many restrictions in certain things. It used to be a calm place.”

Clemente-Lima is one of the thousands of undocumented immigrants in the state of Georgia who are experiencing a shift in the state’s enforcement of new immigration laws.

On April 24, 2013, Governor Nathan Deal signed Senate Bill 160 into law after the Georgia State Senate approved the measure by a 43-9 vote. The Georgia House of Representatives also approved the new law by a vote of 113-54.

Among other provisions, the new law, which will take effect July 1, bans the use of foreign passports as valid identification unless they are submitted with other specific federal documents which demonstrate legal presence in the U.S.

By eliminating the use of foreign passports for identification purposes, many undocumented immigrants will face additional obstacles when trying to enroll their children in public schools or when trying to obtain marriage licenses.

The new law will also require sub-contractors to utilize an employee work authorization program known as E-Verify if they work alongside state contractors and will prevent undocumented immigrants from obtaining public benefits such as driver’s licenses.

According to a letter sent by Governor Deal to a constituent, Senate Bill 160 was crafted to combat what he regards as harmful side-effects of illegal immigration…

Previous Post Latino Organizations Call On President Obama To Take Action On Climate Change
Next PostGuest Voz: Mermaids in America. Or, how does this Ecuadorian girl end up writing fantasy?

Latino Organizations Call On President Obama To Take Action On Climate Change
Comment
Guest Voz: Mermaids in America. Or, how does this Ecuadorian girl end up writing fantasy?