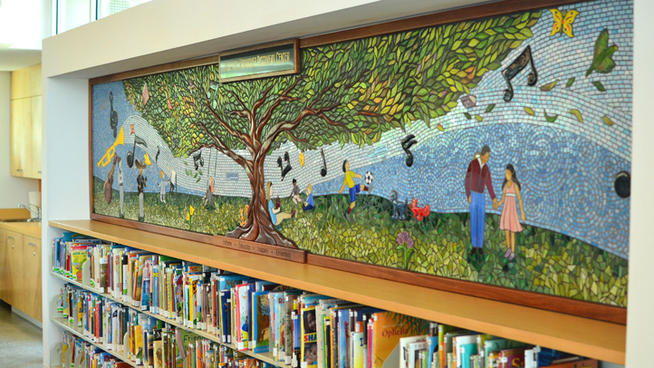 The loss is still painful and brings tears to the eyes of his friends but no matter how much times passes, Jose Luis Rodriguez will always be remembered at the Lincoln Acres Library in National City.

The boy who was on the verge of becoming a man died in a fatal shooting in Chula Vista in November, 2007 just minutes before he was to turn 18. The case was never solved.

But his name will live on over a 3½ by 15 foot mural unveiled Friday at the Lincoln Acres branch of the San Diego County Library. Rodriguez was a student worker there and he’s remembered for being passionate about literacy and library services for children.

During the unveiling, County Board of Supervisors Chairman Greg Cox told a gathering of friends, co-workers and neighbors the mural reflects what Rodriguez’ life was all about. “He spent his life helping members of his family and the community to thrive and become better people,” said Chairman Cox.

“The mural is symbolic of the building of community at Lincoln Acres,” said Library Director Jose Aponte.

The branch was the smallest of all the branches in the County Library system until its recent expansion, but to the neighborhood the library has been huge since day one. It’s the place where locals take advantage of all the library has to offer, where they attend events, laugh and play in the park just steps from the library’s front door. Library staff members know most all of the patrons by name. Rodriguez was part of that neighborhood family.

“The legacy from Jose Luis Rodriguez…