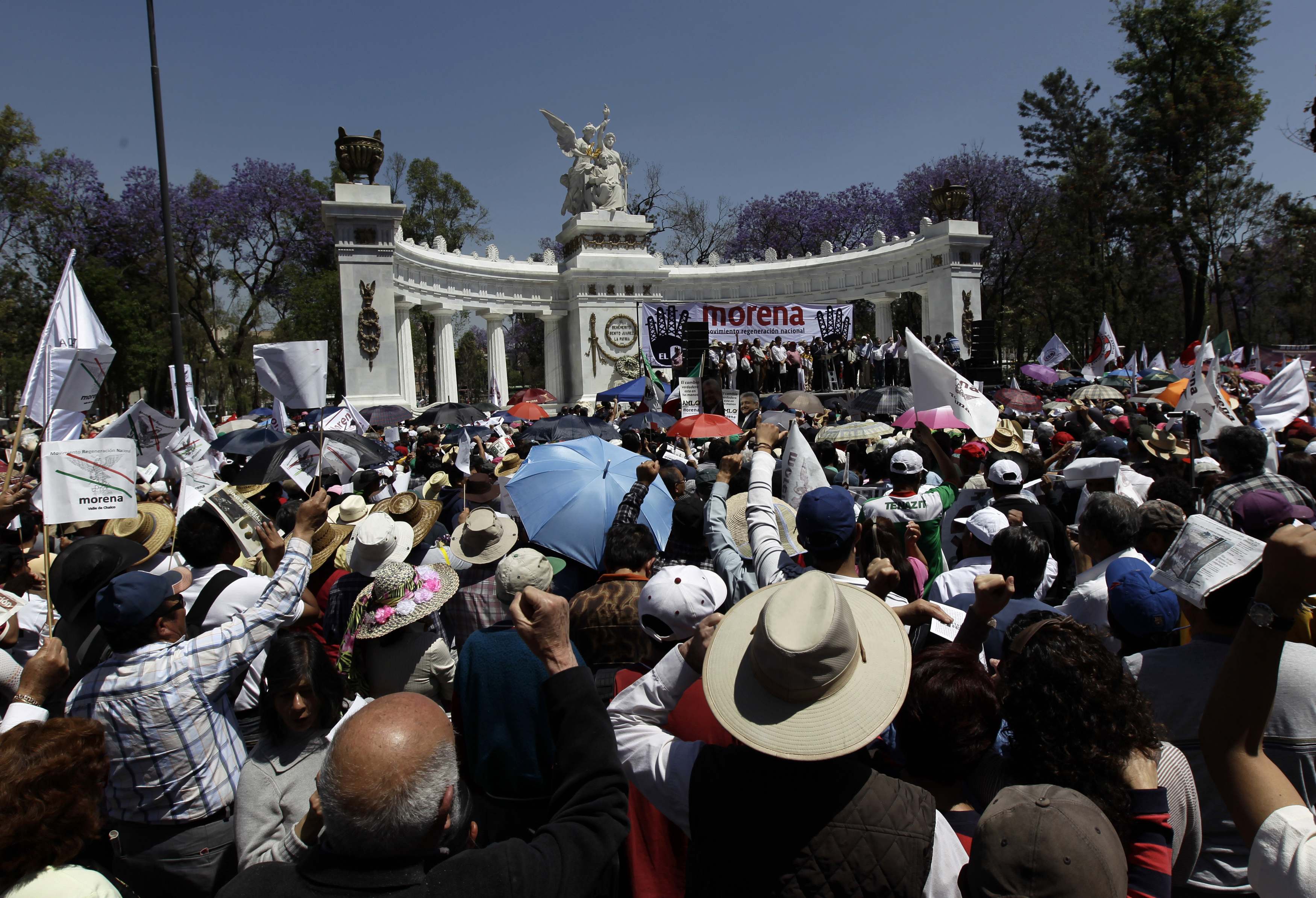 On Sundays, the Benito Juarez Monument in the Mexican border city of Ciudad Juarez is a popular community gathering spot of goods, services, culture and ideas.

A rock band tunes up, while Aztec healers beat hand-held drums and chant into the wind. Floating from person-to-person, a tall woman raffles off a guitar and peddles small plastic packets of pecans.

On a recent day, members of Andres Manuel Lopez Obrador’s National Movement for the Regeneration of Mexico party (Morena) added a political edge to the ambiance. The activists passed out literature, signed up new members and stringed rows of posters across the base of the monument to Mexico’s most revered president that assailed the policies of Mexican President Enrique Pena Nieto and his packet of labor, education, energy and tax reforms.

The reforms, overlaid by ongoing gasoline price increases, go against popular and national interests, contended Jesus Zamaron, secretary for the executive committee of Morena’s Chihuahua state branch. The energy reform will favor a tendency of “privatizing Mexico’s oil,” while tax increases will attack “the stability of all economic sectors of Mexico,” Zamaron insisted. “These are not focused on supporting the problems of the people of Mexico.”

Especially troublesome to border residents, Zamaron added, is the president’s proposal to harmonize the sales tax in the border region from the current 11 percent rate with the national one of 16 percent.

“There is going to be an outflow of consumers to the neighboring country,” Zamaron predicted, pointing to the ability of many residents of Ciudad Juarez and other Mexican border cities to shop in adjacent U.S. sister cities like El Paso, where sales taxes are much lower.

Zamaron and Morena are far from alone in their opposition to one or more aspects of Pena Nieto’s reform portfolio.

Tens of thousands of teachers across the nation continue raising hell about an education reform — now codified into law — that they assert violates their labor rights and encourages the privatization of public schools. On another front, the Citizen Movement party announced the kick-off of a petition campaign in Ciudad Juarez this past weekend against both the pending energy and tax reforms.

To the right of Morena and the Citizen Movement, border business sectors and the conservative National Action Party (PAN) are also heaping criticism on the looming tax reform, which raises some taxes but lowers others.

The Pena Nieto administration defends the tax reform as a vital step in moving the nation forward by generating the revenues needed to create a universal social security system and provide unemployment benefits to jobless workers.

“Every Mexican will have (social security), this right that our Constitution grants, as we desire,” Pena Nieto declared this month.

In an op-ed published in El Diario de Juarez, PAN Senator Javier Corral of Chihuahua concurred with the goals of expanding social security and unemployment coverage, but criticized the tax reform as insufficient without changes in government spending practices, transparency and accountability. Mexican society, Corral contended, does not trust its pesos in the hands of government officials.

“No proposals exist that guarantee the citizens will know how the government spends taxes from labor, profits, property and services..,” Corral wrote.

“If the government of President Pena Nieto wants to convince Congress and the productive sectors of the necessity, not just the goodness of the tax reform, it has to show proven examples of rational spending, as well as efficient anti-corruption, transparency and spending controls.”

Although opposition to the tax, energy and education reforms is mounting, PAN Congressman Carlos Angulo Parra predicted the president’s tax legislation will pass the Congress even with rejection of the PAN and parties to its left.

Quoted in Ciudad Juarez’s Norte daily, Parra said a legislative head count showed Pena Nieto’s plan squeaking by with the support of the president’s PRI party and the swing votes of two smaller parties- the Mexican Green Party and the National Alliance Party, the latter grouping founded by the imprisoned ex-head of the national teachers’ union, Elba Esther Gordillo.

After months of speculation-and a negative reception in public opinion-an expected government move to tax food and medicine did not make the final cut of Pena Nieto’s tax legislation. Lopez Obrador had been one of the more vociferous critics of any attempt to tax the two necessities.

Back at the Benito Juarez Monument, Miguel Angel Roque Guillen said he was among many Mexicans struggling with food and healthcare. The elderly man, standing upright with a determined look, spoke about another grievance that goes back decades. As a young man, Roque was a bracero, a farmworker seasonally contracted to work in the United States.

For four years in the 1950s, Roque worked cotton in New Mexico and Texas, sugar beets in Montana and cucumbers in Colorado. After concluding his service as a bracero, Roque returned to farming in the northern Mexican state of Durango before eventually moving to Ciudad Juarez about 15 years ago.

In the bracero years, Roque said, 10 percent of his paycheck was withheld for retirement purposes in Mexico.

But Roque, like thousands of other ex-braceros, was not paid the money in a timely fashion. During the Calderon administration which ended last year, Roque was among ex-braceros that received a 38,000 peso payment (approximately $3,000) for the 10 percent withholding, which reports later indicated wound up in the Mexican government’s old rural bank, Banrural, before disappearing down a financial rabbit hole somewhere.

Roque said food and other basic expenses gobbled up his 38,000 peso payment within six months. According to the former U.S. guest worker, the braceros are owed much more because of interest that compounded during the long years the money was unpaid.

“The government has all the documents of the braceros. They took out the 10 percent and never delivered it,” Roque maintained. “They owe us billions. I’m not happy with the amount I received. It wasn’t fair.”

Roque described former braceros living in Ciudad Juarez as “poor people” who sometimes “have nothing for bus fare.”

The old farmer said he gets by with the help of his children. Besides the sixty or so dollars Roque said he needs for food every week, money is required for an operation that will include out-of-pocket charges the government’s universal health insurance program, Seguro Popular, does not cover.

In the last few years, the notion of shared responsibility has become common in the lexicon of U.S.-Mexico diplomatic discourse. The term is most often used in the context of joint cooperation in pursuing the so-called drug war, but in Roque’s view, Washington has co-responsibility when it comes to the missing bracero money since it oversaw transfers of money to Mexico.

“If Enrique Pena Nieto doesn’t pay us, then the U.S. should,” he contended.

The historic U.S.-Mexico bracero debt claimed by Roque and other surviving workers and their relatives is now an international issue. This month, a caravan of ex-braceros and supporters crossed from Mexico into the U.S, where a multi-city tour ended in the filing of complaints with the United Nations and the Inter-American Commission on Human Rights.

Video: Empowering people with a simple tool to search, compare and be inspired by constitutions the world over
Comment
Research: Latino Kids Consume ‘Above Average’ Amount of Sugary Drinks