SAN Antonio — With gas prices starting to creep up again, everyone could use a little reprieve. A new intercity bus service might be just the ticket to get away. Just last week, I went to Austin to cover a story and the roundtrip for the Suburban in gas alone cost $80. Wish I had known about Megabus.com … 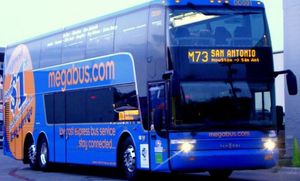 This summer, there may be no need for a staycation when you can get around Texas and beyond for fares as cheap as a dollar.

A company recently introduced double-decker bus service with free Wi-Fi and fares from $1 between several Texas cities —and the service is already popular on the east coast. In June, they expanded to include Texas and the southern United States. Texans can now travel to five cities including Austin, Dallas, San Antonio and Houston as well as Norman, OK, Memphis, Little Rock and New Orleans for as little as a buck.

Jonatan Alcon Domingo, a student visiting San Antonio from Spain, used the service earlier this week to visit a friend at North Texas University near Dallas. He told La Prensa he would use the service again and happily recommends it.

“It was clean and comfortable and I got to Dallas in just over five hours,” he explained. The young man sat at the front on the upper level of the bus and paid $8.50 for the ride which he booked online just hours before boarding.

“I was able to use the internet, watch a movie on my computer and the time passed quickly,” Alcon added. “I could see everything from where I was sitting, too.”

Marcus Williams, a manager in the San Antonio area, explained the fares are cheap because the company keeps overhead low.

“We don’t have bus stations and the fuel costs are low because the buses are green and state-of-the-art,” he said. The environmentally-friendly buses also have free Wi-Fi, power outlets and restrooms for passengers.

It’s best to book online before you travel … but if you must, you can pay the going rate at the pick –up point by credit or debit card (the agents can’t take cash).

The earlier you book, the better chance you’ll have at getting the $1 fare. According to a company press release, fares always start as low as $1 and get higher as the traveling date gets closer. Customers are encouraged to book early to secure $1 fares.

“Megabus.com has rapidly become the travel option of choice for millions of people and today we’re excited to bring our unique travel option to Texas and the southern United States,” Dale Moser, president and COO of Megabus.com said. “As Americans continue to look for ways to stretch their income, we look forward to providing safe, convenient and affordable travel to the millions of residents in the South.”

The $1 seats are available at Megabus.com for departures to and from Dallas and the expansion cities (subject to availability on select dates and routes).

But wait – with a little patience you can book Megabus.com service to New Orleans or as far away as New York City – and by booking early, you can secure passage to a vacation destination at unbelievably cheap prices.

“It really is all about booking early,” agent Taylor at the San Antonio pick-up point on 4th street and Broadway explained.

We checked out the claim – and it was true. After a quick search, we reserved a couple of bus rides to get from San Antonio to New Orleans next week. The total cost was under $30. Or how about a quick trip to Austin without the aggravation and fight for a parking spot, or even spending money on gas? We found fares available to Austin for a dollar all throughout August.

Rumors say the company is doing so well it has plans to expand ever West – the next stop could be New Mexico.