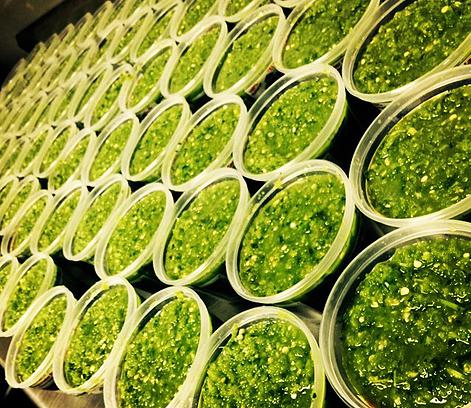 When it comes to traditional Spanish-style cuisine, whether it be soup, beans, chicken, shrimp or anything else bolstered by a zesty sauce, it is very likely that what gives these dishes their distinctive flavor and aroma is sofrito, a blend of herbs, spices and vegetables.

For many Puerto Rican, Spanish, Portuguese and Latin American cooks in Connecticut and parts of Massachusetts, the prime source of this kitchen staple is Sofrito Ponce, a family business based in New Haven. Their sofrito is based on the recipe that Luis Rodriguez Sr. used in mixing fresh batches of this versatile cooking base for sale at the grocery store that he started in a Hispanic neighborhood after he arrived from Puerto Rico in 1959.

Rafael Diaz, a city firefighter, recalls that as a child it was the Rodriguez store, which was named Ponce Market after the owner’s hometown, where he and other youngsters went for candy and ice cream while their mothers  and grandmothers stocked up on ethnic specialties like sofrito.

About 30 years ago, the Rodriguez family expanded their sofrito production beyond New Haven and introduced Sofrito Ponce, which is based on their family recipe.

Today, Sofrito Ponce is distributed throughout…