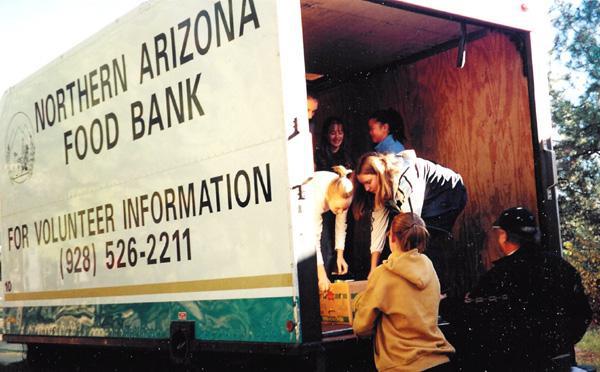 Holiday canned food drives, free turkey dinners and other events during the winter months are how most people see the issue of hunger in America.

Make a quick donation in front of a retail store, or write a check before the end of year for that charitable tax write-off and the issue can placed out of mind for another year.

But hunger isn’t just a seasonal challenge. It’s an everyday existence for many in the nation, including here in Northern Arizona.

While hunger has always been a challenge in the region, the Great Recession pushed the need for services to record levels, said Ketchum, who has worked with the organization for 15 years.

“What we were experiencing back then were middle-income families facing foreclosures,” Ketchum said. “At the height of the crash there were people who just moved out of the area, people who were just struggling to survive.”

As the nation’s economy has struggled to improve in recent years, the need for services has declined somewhat.
A total of 8,741 emergency food boxes were provided in 2012, still above 2008 levels, Ketchum said.

“It has come down some, but it is still bad,” he said.

In fact, results from a recently released “Meal Gap” survey estimates that 18.3 percent of Coconino County’s population of 132,978 was “food insecure” in 2011, with 71 percent of those falling below the 185 percent Supplemental Nutrition Assistance Program (SNAP) federal poverty level, Ketchum said.

Statewide, one in five Arizonans lives in poverty, with that number increasing to one in four for children under the age of 18, according to statistics provided by NAFB.

The organization also reports that more than 30 percent of people in Arizona are considered “working poor,” living at or below 185 percent of the federal poverty level, defined as a gross annual income of less than $40,792 for a family of four.

While hunger affects a wide variety of individuals, Hispanics make up 41 percent of those receiving food stamps in Arizona…