By Cristina Rayas
Cronkite News Service
WASHINGTON — A decade ago Martin R. Apolinar was voted “Prettiest Eyes” by his senior class at Trevor Browne High School in Phoenix. Smiling out of the pages of the high school yearbook, his eyes did not reveal the future that he would see a few years ahead of him.

Three years after graduation, Apolinar enlisted in the U.S. Army and served as a rifleman, machine-gunner and team leader at Fort Riley, Kan. He was deployed as part of Operation Iraqi Freedom and in 2008 he completed his Special Forces Qualification Course at Fort Bragg, N.C., becoming a member of the Airborne Special Forces. 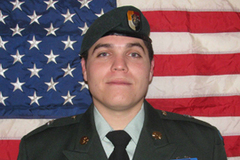 His second deployment was to Afghanistan as part of Operation Enduring Freedom. It was there Sunday that now-Staff Sgt. Martin R. Apolinar, 28, was killed in Wardak Province, when an improvised explosive device struck the vehicle he was traveling in with his Special Forces team on a mounted patrol.

Two other soldiers, Capt. Joseph W. Schultz, 36, of Port Angeles, Wash., and Sgt. Aaron J. Blasjo, 25, of Riverside, Calif., also died in that attack, according to information from Fort Bragg.

A family member Wednesday said the Apolinar family was not ready to comment on Martin’s death, adding that the family likes to “keep things very simple and quiet.”

Gov. Jan Brewer on Wednesday ordered flags flown a half-staff in Apolinar’s honor. In a prepared statement, she asked all Arizonans to join her in genuine reflection for Apolinar’s family.

“May they feel proud of the many sacrifices made by this great American,” Brewer said in her statement. “Likewise, I encourage Arizonans to take a moment to reflect upon the sacrifices made by those who serve our citizens in military, law enforcement and public safety professions. They risk their lives to protect us from harm. We are forever grateful.”

Rep. Trent Franks, R-Glendale, said in a statement Wednesday that Apolinar is “directly responsible for the very freedom that I, my 2-year-old twins, and millions of other Americans enjoy, as he woke up on a daily basis prepared to make the ultimate sacrifice to ensure that those of us back home could continue to walk in the sunlight of freedom.”

Apolinar leaves behind his wife, Elisa, a young son, Martin, and his parents, Gene and Susan, of Prescott, Ariz.

Previous Post Guest Voz: Sad death of 91-year-old Concha Lopez forces the question: Who should care for Latino elders?
Next PostSpotlight Nonprofit: Giving urban teens tools to build a better future for themselves and others

Guest Voz: Sad death of 91-year-old Concha Lopez forces the question: Who should care for Latino elders?
Comment
Spotlight Nonprofit: Giving urban teens tools to build a better future for themselves and others