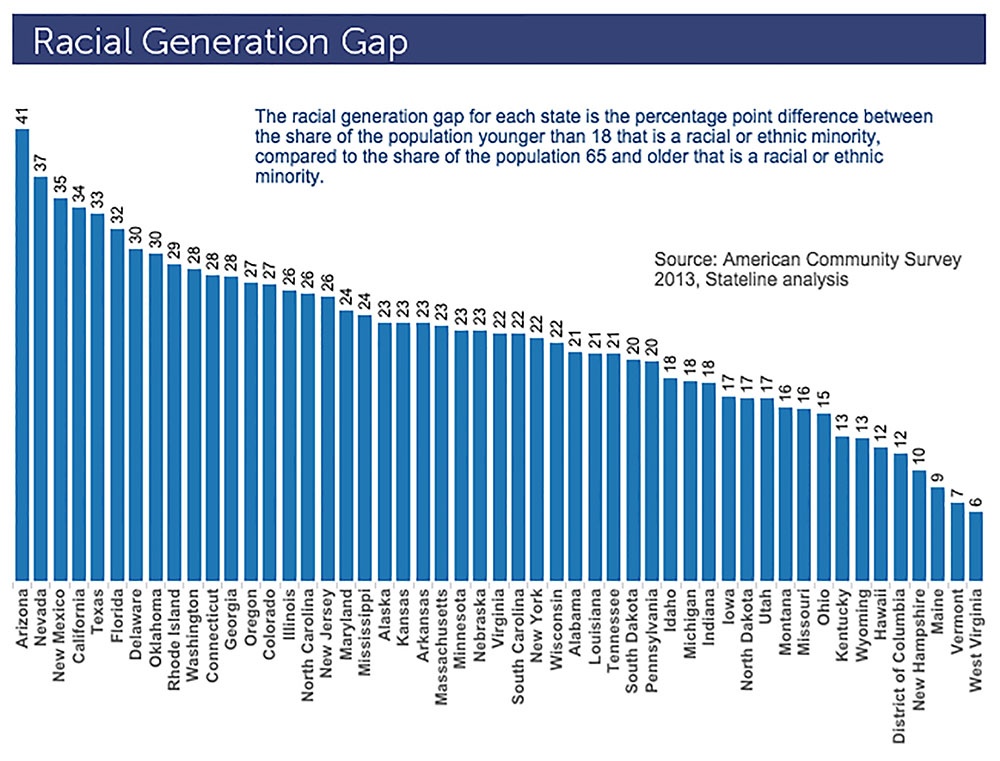 WASHINGTON – Arizona had the largest “racial generation gap” in 2013, a divide that has the potential to heighten political tensions in areas ranging from immigration policy to education funding, experts said.

The gap is the difference between the percentage of minorities who are 65 or older and those who are under age 18, according to an analysis of Census data by Stateline, a initiative of the Pew Charitable Trusts. It put the gap at 41 in Arizona, where minorities made up 18 percent of those 65 and older and 59 percent under age 18.

Nevada had the second-largest gap, of 37, while West Virginia had the narrowest gap, at 6.

“The demographic change is the single most important phenomenon going on (in Arizona), and it’s not something that can be legislated away,” said William Hart, a senior policy analyst with the Morrison Institute.

Schools are also where the impact of the generation gap can be seen most clearly, experts said.

Arizona spent the least per student of any state in the 2012-2013 school years, according to the National Education Association’s 2014 Rankings & Estimates report. It said Arizona spent $6,949 per student in kindergarten through 12th grade that year, compared to a U.S. average of $10,938.

Census Bureau numbers for fiscal 2012 were similar, with Arizona ranking 49th in per pupil public education spending among all states and the District of Columbia.

While they may disagree on the link between spending and academic achievement, most education experts agree that school policy needs to take Arizona’s changing demographics into account.

“That generation gap is something policy makers in the 21st century need to be aware of and understand because it’s going to determine the shape of policy.”

The young, Latino population of Arizona also faces an education achievement gap, something that experts say leaders need to address.

“(It) has tremendous implications for the attitudes of our leaders toward public education and the degree to which they value it,” Hart said. “If increasingly the ranks of students in Arizona’s public schools are individuals who do not look like the legislators and the other leaders in the state, there’s a real danger that they’ll be increasingly neglected.”

Demographers expect the racial generation gap to increase across the U.S. as minority and immigrant populations move from the coastal and border states to the inner states.

“It will first occur in schools. That’s where people notice it,” said William Frey, a Brookings Institution demographer studying race, migration and aging.

Joe Feagin, a sociologist from Texas A&M University who studies racial and ethnic relations, said older people have always had different priorities. They are more interested in retirement than education, while the inverse is true of younger generations. But adding race into the mix complicates things, he said.

“Right now we have this deep racial divide between an aging white population and a younger and rapidly growing population of color,” said Feagin – a 76-year-old who identifies as Irish American. “It creates great tensions – deep, deep racialized tensions in society.”

How the states stack up
The “racial generation gap” is the difference in minority populations under 18 and those 65 and over in every state and the District of Columbia. The biggest and smallest gaps (rounded), and the percentages of younger and older minority residents in each:

Previous Post Initiative strives to launch new awareness of injustices in the criminal justice system
Next PostGuest Voz: Fewer excuses for Latinos to be uninsured thanks to Obamacare

Initiative strives to launch new awareness of injustices in the criminal justice system
Comment
Guest Voz: Fewer excuses for Latinos to be uninsured thanks to Obamacare