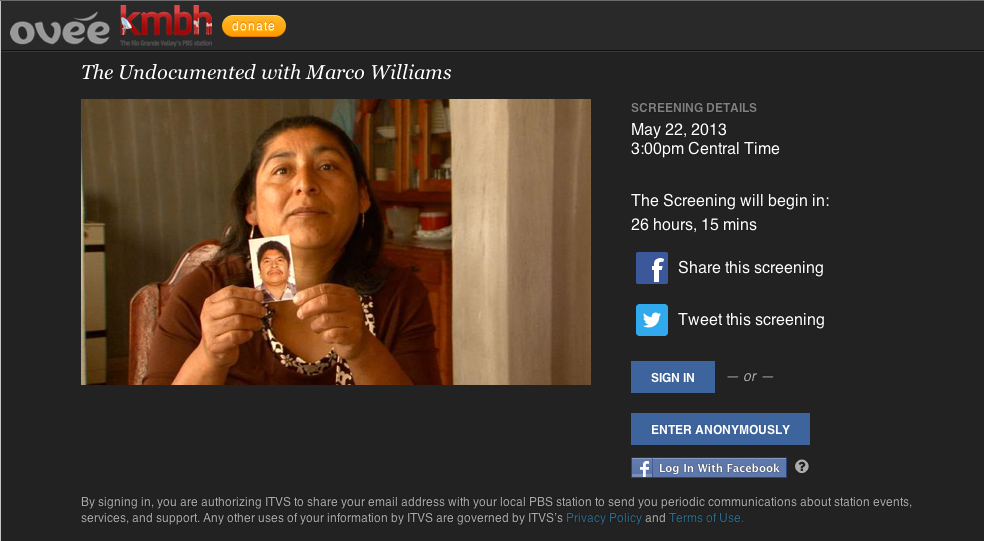 HARLINGEN, TX — KMBH, the Rio Grande Valley’s public broadcasting station, is inviting viewers from around the world to watch the acclaimed new documentary, The Undocumented, online on Wednesday while at the same time interacting in real time with filmmaker Marco Williams.

The Undocumented chronicles efforts by undocumented immigrants to cross the Sonora Desert in Arizona. Since 1998, more than two thousand dead bodies have been found in the desert — the remains of “border crossers” who perished en route to the United States from Mexico.

The movie and discussion are being brought together thanks to OVEE, the new social screening platform that allows viewers to watch their favorite PBS and local public television programs together, from anywhere, on demand. OVEE is otherwise known as the Online Video Engagement Experience.

“KMBH is excited to be offering the new online video engagement experience or OVEE to the Rio Grande Valley. This type of social TV allows us all to communicate and interact simultaneously from anywhere in our region, state, nation or the world,” said Robert M. Gutierrez, general manager of KMBH.

“I am especially excited to announce our live webcast review of the new documentary The Undocumented. The ability for all of us to engage and provide feedback is unprecedented. This documentary will shed light on migrants and the harsh struggle they must endure to find a better life. Don’t miss this exclusive event on KMBH.org.”

Pedro Rodriguez, website manager at KMBH explained that OVEE allows online viewers to interact in real time around content by signing on through the platform or via Facebook. “Viewers can gather online in one spot to converse electronically as they watch PBS and local station content,” he said.

The film’s showing takes place at 3 p.m., Central Time, on Wednesday, May 22, on the KMBH website, www.kmbh.org. Viewers can participate by signing in at this website.

Williams, an NYU professor, will introduce his film and take questions in real time online from viewers.