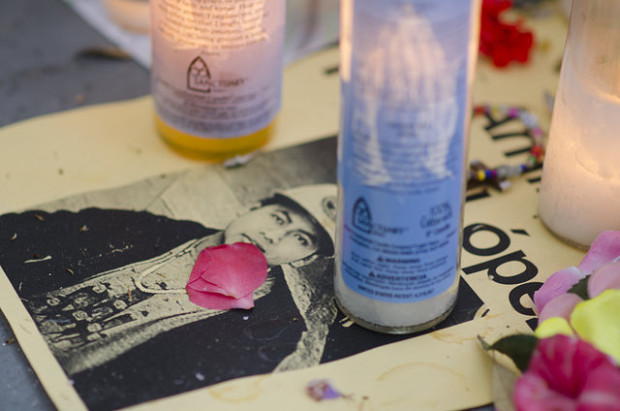 For the first time the roommates of the 21 year-old Guatemalan shot to death by two plainclothes officers on Feb. 26 have come forward to give their version of events.

The two roommates, who asked that their name not be used for fear of reprisals, offered their statements to some 60 neighbors, activists, community members, and relatives of other victims killed by police who gathered at a Saturday vigil for Amilcar López-Pérez.

“The day he was killed, we saw everything,” one said in Spanish. “I want to say everything I know, but I am scared,” he said adding that he feared being deported for not cooperating with police.

Both of the roommates are facing an eviction at the end of the month.

Once again, their version differed sharply from the official version which casts López-Pérez as allegedly attempting to steal a bicycle with a knife when two plainclothes officers came on the scene at 9:45 p.m. The alleged victim thanked police for saving his life, police reported on the night of the incident.