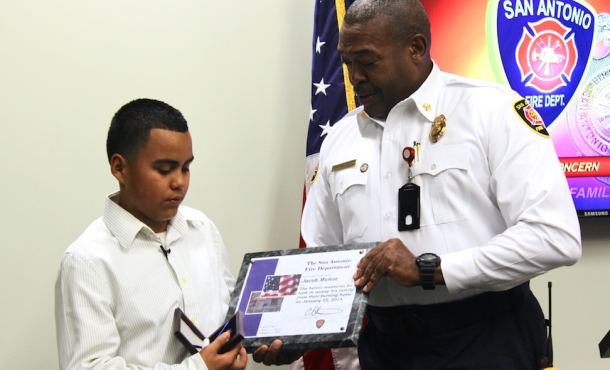 San Antonio, Texas.- It was an early Thursday morning, but 12-year-old Jacob Munoz wasn’t in bed or getting ready for school. Instead, he stood outside watching a fire engulf his home.

On Jan.15, the San Antonio Fire Department (SAFD) arrived to Jacob’s house, located on the 4300 block of Weir.

By the time SAFD arrived, the house was already ravaged by flames. The fire was extinguished; however, there was extensive damage to the bedroom and living room. Smoke damage affected the rest of the home, too.

What could have been a tragedy is instead being celebrated as a tribute to life, love and courage.

In a selfless act of courage, Jacob rescued his mother, 4-year-old brother, and grandmother from danger. He is now a hero in the eyes Fire Chief Charles Hood.

“I woke up choking on smoke, and I saw my room on fire. There were flames on my bed,” Jacob said. “I got scared, and I broke a window to escape, but couldn’t.”

Previous Post Uruguayan shoe company appeals to buyers to clean up environment and get a discount
Next PostCrowdfunder: A visual portrait of Cuban life and society

Uruguayan shoe company appeals to buyers to clean up environment and get a discount
Comment
Crowdfunder: A visual portrait of Cuban life and society