Latina Lista: News from the Latinx perspective > Local News > Southwest > Searching for Migrants on both sides of the border — Dead or Alive 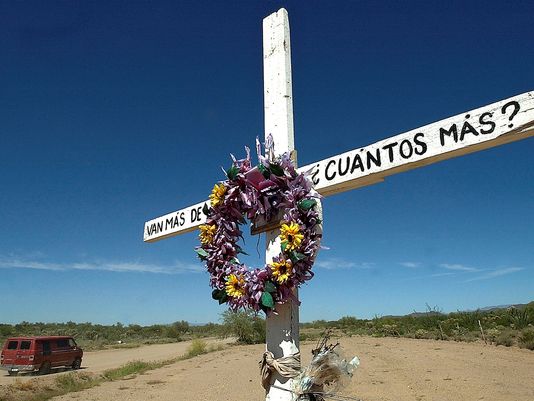 On the migrant roads of North America, rallies, press conferences and remembrances were held December 18, the International Day of the Migrant. North and south of the border, the common themes were justice for migrants, respect for human rights, an end to deportations, and the legalization of the undocumented.

In Mexico, the Ninth Caravan of Central American mothers wrapped up a long journey of more than two weeks in search of loved ones. As in previous caravans across the Mexican Republic, the mothers and their supporters heard some good news amid the bad.

Half-way through the multi-state trek, the caravan reported finding six missing persons alive and receiving leads on others.

“In each place we’ve arrived, we’ve enjoyed the caring participation of many organizations and shelters along the route. They are local hosts, indispensable for the good transit and success of the caravan,” the Mesoamerican Migrant Movement said in a communiqué.

Once again, the Mesoamerican Migrant Movement (MMM) denounced the crime and violence perpetrated against migrants as “genocide.”

Some estimates of the number of Central Americans missing after departing for the United States via Mexico run as high as 70,000. Central American nationals are suspected as being among the still-unidentified murder victims found in mass graves unearthed in the northern Mexican border states of Nuevo Leon and Tamaulipas between 2010 and 2012.

The MMM demanded justice for the victims and trial for the criminals, enhanced efforts to search for the disappeared, and visas so migrants could freely travel in Mexico without being attacked, raped, kidnapped, or murdered.

According to the Cimacnoticias news service, the various Central American mothers’ caravans have succeeded in finding more than 200 missing people.

In New York City, meanwhile, the Argentine Forensic Anthropology Team (AFAT), a non-governmental organization originally founded to identify the victims of the Argentine military dictatorship, plugged away at its three-year-old project of identifying human remains of people thought to be migrants recovered in Mexico and the U.S.-Mexico borderlands.

“All the states involved in this large corridor of migrants should do more than they are doing,” said Mercedes Doretti, AFAT senior investigator. “This is the reason families have to go through Mexico with photos looking for their loved ones.”

Doretti told Frontera NorteSure that the AFAT, together with U.S and Mexican officials and civil society representatives, is making progress in identifying migrants who perished along the perilous routes leading from Mexico’s southern border to the United States’ southern frontier.

In collaboration with migrants’ relatives and non-governmental groups, the AFAT recently signed an agreement with the Mexican federal attorney general’s office to increase DNA information sharing. “For the first time, we’re working with the national forensic service,” Doretti said.

There is the hope that this commission may be able to identify some of the remains,” she said, adding that a sad qualification underlines the work. “Obviously, it is not a happy hope.”

The new commission builds on the AFAT’s ongoing Border Project and collaborations with the Pima County Office of the Medical Examiner in southern Arizona and other U.S. institutions.

The AFAT Border Project has so far collected DNA for 618 missing persons, while receiving the DNA of 583 families.

Additionally, as 2013 drew to a close, DNA testing had positively identified 59 persons and tentatively identified 20 others. Most of the human remains were recovered in Texas and Arizona, with 25 and 22 cases, respectively, while Mexico came in third with 10 sets of remains.

On a nationality basis, the deceased were identified as people from El Salvador (28), Honduras (15), Guatemala (13), the southern Mexican state of Chiapas (2), and Costa Rica (1).

According to Doretti, Brooks County in Texas, where 127 bodies were recovered last year, has emerged as a death trap for migrants. There, migrants attempt to evade a Border Patrol checkpoint only to get lost in the dangerous terrain, she said.

Creating a centralized DNA data base linked to the vast region from Central America to the United States is an important goal of the Border Project, Doretti added.

The work ahead for the non-profit AFAT and its partners is daunting. Considering the reports of a back-log of 25-30,000 human remains in Mexico alone, the identification work underway is barely scratching the surface, the AFAT’s veteran investigator said.

“What we’ve been learning this past year is the problem is much larger than we thought,” Doretti said. “In a way, we’re kind of at the tip of the iceberg, because the majority of people identified in Arizona, for example, are Mexican nationals. Once the Mexican cases get organized, we have the impression there will be thousands of people.”